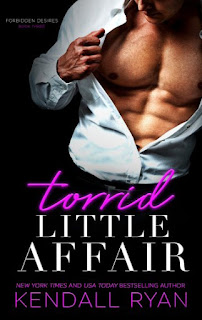 Ooh! Well now. After reading Dirty Little Secret and Dirty Little Promise, the one thing I knew for certain going into the third full-length novel in the Forbidden Desires series was that I wanted Cooper Kingsley to find the woman who deserved someone like him. Yeah, I admit it; I was all kinds of bitter that Cooper's older brother Gavin ended up with Emma Bell, but it wasn't as if that story was going to have any other sort of ending, not when those two were already connected from the get-go. Sigh. But anyway, I wanted Cooper to have his own happily-ever-after as well, and in this latest release from the series, bestselling author Kendall Ryan gives him exactly that (yay, no cliffhangers!). Here's the thing though: no one said finding "the one" and keeping "the one" was going to be easy.

Torrid Little Affair finds Cooper Kingsley back to work at the company that he and his two older brothers own. To welcome him back to work after being away for six months to mend his broken heart and ego, Cooper's told he's got a gift waiting for him. The gift was beautiful and curvy and everything about her called to Cooper. Why not indulge in a bit of sexual release, right? Only, it turns out that Corinne O'Neil wasn't the kind of gift he thought she was. She was his new personal assistant, and his sexual advances were certainly not how he wanted to make a first impression. But underneath the shock in her eyes, he also spied something else--something akin to desire and curiosity. So, what's a guy like Cooper supposed to do with that? Well, make Corinne an offer she couldn't refuse...

I've loved Cooper ever since he was first introduced in the full-length series starter, and I was thrilled that his story was such a fantastic read, one that had an element of mystery of it courtesy of the secret that Corinne was hiding from him. That secret was one that I though I had figured out, but it turned out that I only got part of it right, so kudos to Kendall Ryan for keeping me on my proverbial toes. As much as I've always adored Cooper, I so felt for Corinne, especially when the enormity of her situation came to light. The woman's heart knew no bounds, and that ending? Gah! It proved that she and Cooper totally deserved each other. Torrid Little Affair took me by surprise, not because it was written well (I'm used to that already), but because of its unique story line. Five stars. ♥