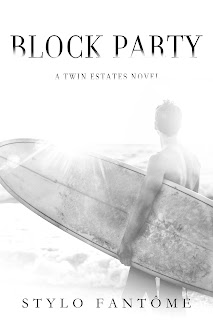 Liam Edenhoff is as easygoing as a man can get. He has simple wants and needs. As long as he's got a regular dose of women, sex, and tacos--and not necessarily in that order--he's a happy guy. He isn't meant for more, and by more he's talking about committed relationships like the one he wasn't deemed good enough for recently. Yep, sticking to casual sex is best. Now if he can only find someone who's looking for the same thing. Lo and behold, his new neighbor seems to fit the bill. She isn't on the lookout for a ring on her finger or a man to pledge his troth to her. She wants sex and lots of it without any strings to choke on. The clincher? Liam knows her, and she knows all about him and what he's been through lately. The setup is exactly what they want...but will they soon want more?

And the Twin Estates series has bounced back with Liam Edenhoff's story! Block Party is the third novel in the series and after the rejection he suffered in the duet that covered the trio of Liam, his friend Wulfric Stone, and the girl they lusted after, Katya Tocci, the guy deserved a woman who would both be worthy of him and make him  want to be worthy of her. Who would have thought that woman would turn out to be someone who was already lurking (and I don't mean that in a creepy, stalker-like kind of way) in the pages of the Neighbors and The Neighborhood? I'm talking about none other than real estate agent and Wulf's executive assistant Ayumi Nakada. Liam and Ayumi proved to be a couple that were fun to read about, and Stylo Fantôme didn't disappoint. 4.5 stars. ♥