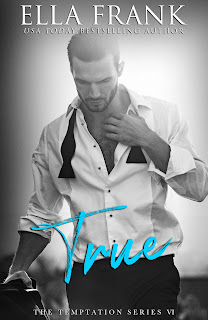 
“So you think you're going to like being someone's husband, then?”

Sigh. It's only been a handful of minutes since I placed my Kindle by my side having reached the end of the advanced reader copy of True, and I'm still trying to come to terms with the fact that this was it—the sixth and final novel in the extraordinary love story of Logan Mitchell and Tate Morrison. I only decided to read the first three novels—which was the original Temptation trilogy—earlier this year, finally realizing the error of my ways, especially since a friend of mine had repeatedly recommended these books to me. But here's the thing that's made me feel less like an idiot: Logan and Tate's tale is the kind of love story that can be read at any time and the appreciation for them would be the same. What I'm basically saying is that I have met fellow readers who read met Logan and Tate a little over four years ago and have loyally followed them since then, and I have come across those who, like me, only met them recently and have fallen in love with them swiftly and surely, but in either case, the love for L&T was the same. I mean who could ever resist these two men and their extraordinary tale of true love?

I'm going to try to keep this review of mine spoiler-free, but my suggestion is the same as the one I made in my previous review for this series: read the books in order. There was a bit of a cliffhanger in book five, Tate, but it was the kind of cliffhanger that had me hugging my pillow even more tightly rather than me wanting to punch it to within a inch of its life. In this last Temptation novel, Logan and Tate are about to embark in the next chapter of their love story—of their lives together. Tate may have said "no" before, but if their story has taught me anything, it's that you can always change your mind, allowing it to agree with what your heart already knew all along. Logan and Tate inspired each other to try something neither one had ever experienced before. Both men chose to take a chance on one another and on love, knowing that they could trust the other to not just catch them but also to help find firmer footing. Over six novels, these two guys made it their mission to tease us, but ultimately, they showed everyone that love—the kind that's tested and triumphed, becoming the truest of its kind—always wins in the end.

This book—heck this series!—broke me, BUT it also put me back together. Logan Mitchell and Tate Morrison finally get the happily-ever-after they deserve and in the process, fans and readers of the series, those who have stayed by their said from the get-go, get the series ender that we deserve. Temptation wasn't my first set of Ella Frank reads, but it's the one that remains fully entrenched within the confines of my cynical yet romantic heart. There were only two M/M couples who I cried over once the series in which their stories were told was over and done with. Logan and Tate are now the third to make it on that rarefied list. This series is where I witnessed and experienced just how far Frank's writing has come and how she's able to strike that perfect balance between the romantic and erotic. Her upcoming series about somewhat new yet somewhat familiar set of main characters is already one of the most anticipated releases for next year onwards. But for now, I bid L&T goodbye and say thank you to Ella Frank for sharing them with us. You'll never discover what's true if you don't dare to try. Five-plus stars times six and then doubled four more times for True. The Temptation series getting the same goes without saying. ♥