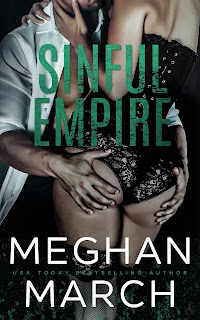 No more pretenses. No more imitations. Everything from today forward is as real as it gets. Keira Kilgore is mine.


Well now... How the hell am I supposed to put together a review that'll properly convey exactly how frickin' fantastic the Mount trilogy ender was without adding any spoilers that may explain WHY it's so frickin' fantastic?! Gah! But I shall endeavor to remain mum when it comes to certain details about to story. What I will insist upon is that you read the books in order. So, that's Ruthless King, Defiant Queen, and Sinful Empire. You could try to read them as standalones and out of order, but then, don't come running to me and complain that there was stuff that didn't make sense. Seriously, people, just read them in the order they were published. They're three books and not overly long, and trust me when I tell you that you will not regret a single minute you spend with Lachlan and Kiera.

So, who is this Lachlan and Kiera I speak of? Lachlan Mount is ruthless and the undisputed king of New Orleans but his reach has been known to go beyond the Big Easy. Kiera is defiant and was Mount's prisoner...but could she be Lachlan's queen-in-waiting? Bits of Lachlan's past were mentioned in the first two books, but it's in the third one where readers find out how the man that's both feared and respected by many came to be known. There are also some stunning revelations that play out in this final book, and  we get resolutions peppered with curiosity about certain peripheral characters and what may await in the next batch of Meghan March's Anti-Heroes collection. If you've never experienced falling for an anti-hero before, then you've probably never read March's books. There's your New Year's resolution right there. For now, let us bask in the five-plus-starred greatness that is Sinful Empire. ♥

Read my reviews for the Mount series: