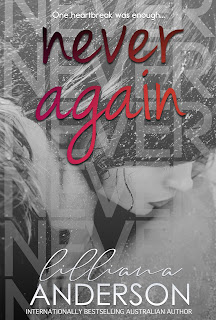 “Don’t fight this, Cora. You and I, we’re inevitable.”

If Lilliana Anderson made me cry with 47 Things and One More Thing a few months ago, she put one hell of a smile on my face with her newest standalone, Never Again. A May-September romance (because the age difference between the main characters is a couple of months shy of a decade) with the woman being older has always tickled my fancy more than the usual way around, and Anderson more than delivered with this one. Cora Knowles and Brandon Sharp are one of the most engaging fictional couplings that I've had the absolute pleasure of reading.
She's a few months away from turning thirty and he turns twenty on the night they meet, but their love story goes beyond the age difference. It's saddled with complications, but at it's very core, theirs was a love worth fighting for.

Cora Knowles had spent eleven of her twenty-nine years loving Jack Knowles, with the past year spent married to him. But catching her husband cheating on her in their own bedroom led her to separate herself from him. It would take a year of that separation before divorce proceedings could commence. But in the meantime, she may as well take her best friend's advice and find some young man to distract her. The guy with the mesmerizing green eyes at the club more than fits the bill, looking to be, at the very least, twenty-five or so. One hot hookup and a quick getaway in the morning later, Cora is shocked when the same guy shows up at her office. Quickly, she learns three things about one Brandon Sharp: he's twenty, he's the Director of Prosecution's son, and he's her new intern.

If you read enough romance novels, you'll know that one-night stands can lead to happily-ever-afters, and that's exactly what happens in Never Again. While the ending is very much the kind that romance fiction enthusiasts crave for, don't assume that this is a run-of-the-mill love story in that the main characters fall in love and ride off into the sunset together. Cora and Bran's relationship is fraught with complexities from the get-go, even if neither of them were aware of exactly what they were going to be up against should they choose to go beyond a hookup. Cora may have been separated but she was still, for all intents and purposes, married, Bran was nearly a decade younger than she was, and he was her boss's only son. Additionally, Bran's internship made Cora his boss in return. Oh, and did I forget to mention that Cora's estranged husband is a jerk who women should be warned away from?

I think one of the best things about this book was the fact that there was so much more depth to both the story and the characters than I could have ever hoped for. This isn't about Cora being a cougar or Bran being a young alpha. These two were not looking to fall in love, but that's exactly what happens. Their romance is hot and heavy with distinct possibilities of becoming the love story of a lifetime if they can only move past their respective issues. Because at the end of the day, age may not matter, but being married to someone else, even if in name only, could be a deal breaker. It's Anderson's handling of seemingly taboo subject matters (i.e. age difference, inter-office affair, extra-marital relations, infidelity) with both heart and humor while never trivializing them along with Cora and Bran as a swoon-worthy couple that made Never Again a book worth reading again and again. Five-plus stars. ♥