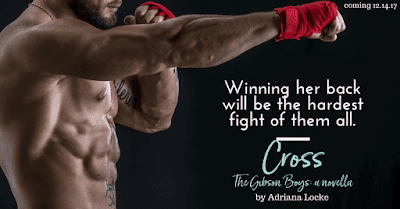 Cross is part of the multi-authored Team Player anthology and also serves as a standalone novella in Adriana Locke's Gibson Boys series, although it takes place prior to the events in the first full-length novel, Crank. If you've read Crank already, then you may recall Cross Jacobs, Machlan Gibson's best friend. While he may not officially be part of the Gibson clan--Walker, Lance, and Machlan are brothers while Vincent and Patrick (aka Peck) are their cousins--he is part of that close circle of friends. This second-chance short story has Cross trying to win back his ex-girlfriend Kallie Welch after one ill-advised action too many broke them apart, leading Kallie to walk away, not just from him and their relationship but from their hometown of Linton, Illinois in order to lead a better life for herself.

While there was no denying how much Cross and Kallie loved each other, there was also no denying how much trouble Cross got himself into. With him on a road to self-destruction, Kallie needed to take a different path to self-preservation. When Kallie finds herself back in Linton, she knows all too well that she's bound to see Cross sooner rather than later, especially given how they shared some of the same friends--friends who continued to live in Linton while Kallie left it--and them--all behind. She's planning to make Linton her home base once again, so maybe she and Cross could try rekindling their friendship. However, Cross doesn't want to be friends with Kallie. What he wants is to show her how much he's changed and that both he and their love story deserve to have a second shot.

For such a quick read, Adriana Locke packs quite a punch (pun intended), giving readers a romance that isn't the least bit superficial. I liked that we learn of the history between Cross and Kallie and how Cross truly does put in the effort and work to regain Kallie's love, trust, and respect. These two didn't pretend that they weren't still drawn to one another, but I appreciated the hesitation that hung over them. Once bitten, twice shy and all that. Cross does all the other Locke-penned male main characters proud, and had Kallie waited a wee bit longer, I wouldn't have hesitated to knock her out to get to the guy. That's not to say Kallie was a great gal because she was and kudos to her for putting herself first. Cross left me both satisfied and craving for more of the Gibson Boys. 4.5 stars. ♥

Purchase Cross (as part of Team Player) on Amazon.