Review: How to Blow It With a Billionaire by Alexis Hall (Arden St. Ives #2) 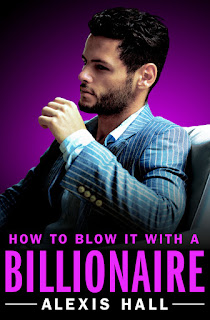 “How many times are you going to ignore me telling you that I love you? Because I do. I really do. And you can think all these awful things about yourself if you must. But nothing—nothing, do you hear me—will make me believe them.”


Oh. My. First things first: Why, oh, why would you choose to torture me with another cliffhanger, Alexis Hall? WHY?! By the time this book is released, it'll be less than two weeks before Christmas, and if the feeling of anxiousness and anticipation is what you wanted us to have in our proverbial stockings, then...achievement unlocked. Did I have a feeling we were going to end up with another cliffhanger? Yes, I did because I had guessed the Arden St. Ives series was going to be a trilogy. But then when I actually had that cliffhanger staring back at me on my tablet? Gah! Major frustration, but then that's what happens when I'm so completely invested in a story and I'm left hanging, desperate to get the resolutions and answers that I'm seeking, but knowing I'll have to wait until next year (February 6th according to Goodreads, but August 14th according to the publisher's website) for all that.

How to Blow It With a Billionaire--which I mistakenly listed down on my planner as How to Blow a Billionaire (you can clearly see where my mind was at)--picks up exactly where the series starter, How to Bang a Billionaire, left off. Caspian Hart's efforts to woo back Arden St. Ives has paid off and they make their return from the latter's Scottish hometown of Kinlochbervie to One Hyde Park in London. Things appear to be going in the right direction going forward. Caspian is trying harder to be more present and available for this non-relationship that feels anything but. While Caspian rules over the financial world, Arden begins to create his own path, pursuing his dream of becoming a journalist. But Caspian's past is ever-present, even as he refuses to acknowledge it and Arden continues to press for more. When reminds of everything Caspian has kept buried make their presence felt, any future with Arden is put into question and any resulting implosion may forever damage the fledgling foundation they're building upon.

Oh, Caspian and Arden! How you've left my poor heart squeezing painfully in my chest for both of you. Sigh. Caspian is clearly protective of and cares for Arden, but he also isn't allowing himself to fully let go and simply be with the younger man. Whether it be for fear that he'll hurt Arden in more ways than one or seeing the real him will have Arden rejecting him, Caspian is very careful and controlled. The thing is, Arden wants all of Caspian, not just the parts of him that Caspian thinks are acceptable or will pass muster. Arden sees Caspian in a completely different light as Caspian sees himself, and that was just one of the more heartbreaking moments in this book. It was like Caspian believed Arden deserved the world and more, yet Caspian never felt he was ever worthy of Arden.

Alexis Hall clearly wields a special kind of magic, interspersing angst and with almost seamlessly with a story arc that has had my absolute attention from the get-go. Yes, yes, this isn't the first series that has an alpha billionaire with a thing for kink and with a questionable past who sets his sights on a seemingly innocent and naïve person several years younger than him. But here's the thing--and I'm not trying to dis a particular author or book--Hall's writing is beyond compare. He's backed up an enticing story with writing prowess, so I'm not spending my time thinking how good the story is but it's sad that the writing isn't up to snuff. His characters aren't perfect--hell, sometimes they can be really frustrating--but I don't look for the ideal when I read. I crave for characters with a worthwhile story to share, and I get exactly that with How to Blow It With a Billionaire, which gets five-plus stars. ♥

Read my reviews for the Arden St. Ives series:

Purchase How to Blow It With a Billionaire on Amazon | B&N | iBooks | Kobo.