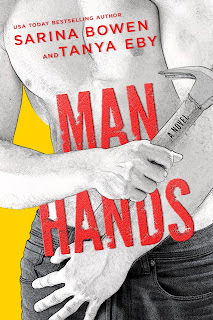 Sarina Bowen is one of my favorite go-to authors, and whether as a solo writer or working as part of writing duo, her stories have, more often than not, resonated with me and left me happily satisfied. With Man Hands, she not only introduces a new series but a new writing partnership. If I had any worries about whether or not I would like her and Tanya Eby's first offering to fans and readers, they aptly brushed those worries aside with a romantic comedy read that had me snickering and smiling more times than I could have hoped for. Bowen and Eby clearly work well together, and if this first book in their Man Hands series is anything to go by, we're in store for a whole lot of romping and romancing in what I expect will be two more books to follow (because the female main character has two best friends, one of whom is married but seems to have marital woes and the other has already been paired up for the second book in a likely enemies-to-lovers story with the male main character's best friend).

Thirty-four-year-old food blogger Brynn (whose last name I don't recall being mentioned, unless she's still using her ex's which is Masters) lost her job as an English writing professor right after she lost her husband, but then maybe that's what happens when the head of your department is your now-former father-in-law. Filing for divorce was her only recourse, not wanting to remain in a marriage where the man she thought she would spend the rest of her life with didn't seem to be interested in being intimate or romantic. When she finds her ex with another woman at a party, her friends push her to kiss the first man she makes eye contact with. The hot gardener seems to be prime for the picking, erm, kissing, and one hot kiss leads to one hot hookup. What Brynn doesn't know is her gardener is none other than Tom Spanner, the thirty-eight-year-old star of his very own home makeover show...who becomes the star of a sex tape. His co-star? The fab woman who's about to be his fake fiancée: Brynn.

I already know that Sarina Bowen can mix hilarity, heart, and heat, as evidenced by her WAGs series with Elle Kennedy. In this new series with Tanya Eby, those three elements are still very much there, but there's a different flavor to this writing twosome, and it's a combo that I'm already liking a whole lot. What's not to like with these main characters? They were rejected by their significant others and yet they were able to find true love with each other and hell, it was so much better than what they once thought they had. They're funny and flirty and an absolute dynamo of a duo in and out of bed. The foodie maven and the home renovation expert were a match made in rom-com heaven. I have no idea how Bowen and Eby split their writing responsibilities, but damn, it was impossible to tell if they even chose the character apiece avenue. I highly recommend you check out their first foray as a writing pair. Prepare to laugh...and maybe even pee a little. I happily fork over five stars for Man Hands. ♥