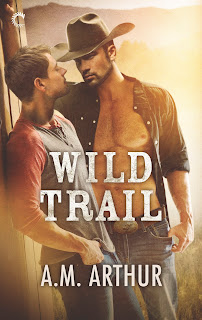 Note: This ARC was provided by Harlequin - Carina Press via NetGalley in exchange for an honest review.

A.M. Arthur's got a brand new series that's launching today and if this first book is anything to go by, the Clean Slate Ranch is looking like one hell of a good ride. Set in a small Northern California town called Garrett, the Clean Slate Ranch is a dude ranch of sorts, with guests interacting with the horses and nature while participating in a variety of activities. Thirty-four-year-old Mack Garrett left his life as a member of the SWAT in Los Angeles behind five years ago, choosing to find solace and a change of pace working on his grandfather's ranch. His two closest friends, former fellow SWAT member Colt Woods and former firefighter and friend since childhood Reyes Caldero, came along and have stayed ever since. Life has been quiet and uneventful and that's exactly how Mack prefers it.

Mack has kept himself free of any romantic entanglements, not the least bit tempted by anything more than a hookup. And then a bridal party consisting of one bride and four guys shows up to the ranch, and the person of honor immediately gets under Mack's skin. Thirty-one-year-old Wes Bentley is a handsome flirt who seems to zero in on Mack from the moment they lock eyes. Experience has taught Mack to be wary of actors and Wes is realistic,  knowing full well that he's only there for a week, and this would be nothing more than a temporary fling between two willing men. They're both intrigued and irritated by each other, but the attraction is an undeniable one. Maybe scratching this particular itch will get everything over and done with...or it could be the start of something...more.

Wild Trail was a slow burn romance between the gruff Mack and the gregarious Wes, and while it did get off to a somewhat slower starter than I had expected, things picked up pretty quickly after the discovery of the ghost town is made. Both Mack and Wes are men who've been burned by their respective pasts, both romantically and professionally. They don't have sob stories to tell with as far as their families go, so that was definitely refreshing. I liked getting to know them, especially since they came off quite confident but had their own share of insecurities and issues. Trust and respect had to be established before anything else, i.e. love, could come into play and that made for far more realistic expectations instead of the usual falling fast and hurtling towards a happily-ever-after.

This book also worked really well as a series starter, giving us one love story while introducing peripheral characters that I'm pretty sure will be featured in their own stories as the series moves forward. I'm guessing a second chance romance with some kink to it for Colt Woods and his ex who begins work while the ghost town is being restored, historian Avery Hendrix, and one for Reyes Caldero and Wes's roommate, Miles Arlington. The latter possible couple appear to have some dark histories and you know what they say about silent waters... With some suspense thrown in as well as a bit of humor and drama and a couple of unexpected twists, Wild Trail more than kept my attention, and I can't wait to see where A.M. Arthur takes readers next with her cowboy romance series. 4.5 stars. ♥