Review: Only You by Kay Doherty 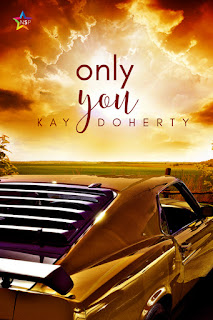 Only You is my first Kay Doherty read, and it pits a twenty-five-year-old city guy with a reputation for partying inside and outside the bedroom and a forty-four-year-old small town sheriff whose heart was buried alongside his late partner. Casey Holden hopped in his gold Mustang and decided he needed a break from the carousing and sleeping around he was doing in Denver. On his way to his aunt's home in Clover City, his beloved car gets stuck in the mud, forcing Case with no other option than to walk. Then the sheriff comes to his rescue, and Rawley Kane is every bit as gorgeous as he is grumpy. From his polished look to his flashy car, Case is every bit the city boy he seems to be, but there's no denying that Rawley is attracted to the guy, even if he seriously doesn't want to be. He left his heart behind along with life as he once knew it in Denver after losing his partner. But as much as Rawley is drawn to Case, can he afford to risk his heart on a guy nearly two decades younger than him and had six boyfriends all too recently? They've both got pasts, but what'll it take to prove that the present is only about the two of them?

I was quite satisfied with this standalone! It would have been easy to label Casey (yeah, I prefer calling him that since that seems to be the best version of him than when he was Case) a manwhore, but there were reasons why he seemed to hop from one man to another. Now, that doesn't mean I'm excusing his behavior, but he did realize the error of his ways and he did want something better for himself. The age difference as well as their respective complicated pasts made Casey and Rawley an interesting pair. There was a great deal of back and forth going on, but these two were far from boring, and I did find myself invested in them and the outcome of their love story to a certain degree. I'm not entirely sure if this really will stay a standalone or if the author has plans for stories that center on one or two of the other supporting characters. There's also one couple--Ryan and Jake--who I'm quite curious about, and I did wonder if they had already had their story told before or not. But I digress. Only You was a story about knowing what to let go and what to hold on to and moving forward. I'm giving it four out of five stars. ♥

Purchase Only You on NineStar Press | Amazon | B&N | Kobo.