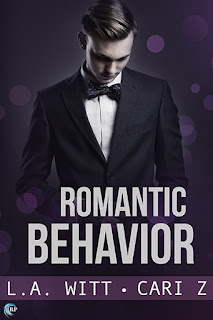 And just because I could, I kissed my husband again.


Romantic Behavior is the fourth and (gulp!) final book in the Bad Behavior romantic suspense series from the wonder duo that are L.A. Witt and Cari Z. Yes. This is the series ender that I was both excited and anxious over. Think bittersweet, folks, because this series was, hands down, one of the best for 2017. Yes, yes, I know that books three and four are to be released in January 2018 (two weeks apart, mind you!), but I read them in the closing days of this year, so I'm counting them as part of my year-end list of best, top, and favorite series. This is one of those series wherein you're sad that it's coming to its inevitable end, but you heave a sigh of relief exactly because it leaves you both wanting and satisfied. Add to that the fact that Detectives Andreas Ruffner and Darren Corliss were just one of two couples in a continuing series that truly stood out for me these past 365 days. I'll miss them.

After everything they've endured and survived, Andreas Ruffner knows that Darren Corliss has his back, will remain by his side, and would take a bullet for him, both on the job and off. When he looks at the rest of his life, there's no question that the one person he wants to share it with is Darren. Proposing to the man is one thing, but all the planning and prepping for the actual wedding could be something that'll take them years to recover from. With Andreas's mother showing her disdain for the age difference and the fact that Darren is a man, and Darren's own mother jumping in to wedding planning with a hell of a lot more enthusiasm than either of the grooms, maybe they should've simply kept the wedding small--as in just the two of them. With Andreas's kids and their respective parents to consider, Darren and Andreas may have to grin and bear it...and hope they make it to the honeymoon!

No bullets, no bloodshed! Yep, this last (wah!) Bad Behavior book is the happily-ever-after that fans and readers of the series have been hoping and waiting for. Andreas and Darren do indeed-y get the happy ending they deserve, but these two, much as they wish for the contrary, do not lead a boring life, and same goes for the journey from the proposal to the walking down the aisle, and of course, the honeymoon. I used to want the whole fancy schmancy wedding when I was in my 20s, but two decades later (and with a whole lot more sense), I get why there some prefer to keep the affair intimate, and I felt for the two grooms-to-be. There are more lighthearted moments than you may be used to, but there's also a hint of angst, and my angst-addicted self was grateful for it. Romantic Behavior gets five-plus stars, and fingers crossed this isn't the last we see of L.A. Witt and Cari Z working together! ♥