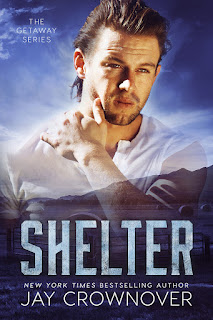 Jay Crownover takes readers back to Wyoming and the Warners in the second novel in her Getaway series. Shelter is the story of middle brother and single father Sutton Warner and city girl Emrys Santos. After surviving the events that ended with both Sutton and Emrys with scars--both on the outside and inside--Sutton wanted nothing more than Emrys to leave the ranch the Warners owned, to leave the state altogether. Upon leaving, Emrys believed she would never return... except... there was a part of her that she left behind in Wyoming, and if she had any hope of truly moving forward with her life without any regrets, she knew that she would have come face to face with the biggest regret of her life. Emrys knew Sutton wouldn't exactly welcome her back with open arms, but the man she encounters upon her return is a shell of of the one who put his life on the line for her months ago. Alcohol and pain medication addiction are taking their toll, not just on Sutton, but on those who mean the most to him--his daughter Daye and his brothers Cyrus and Lane. Emrys's return may break Sutton, but she could also help heal him.

After everything that Sutton and Emrys endured in Retreat, I had a feeling they weren't going to merely bounce back to the people they were prior to it all. If anything, they would forever be changed by those harrowing events. And I was right, and it's moments like those which can either make or break you. My heart broke for Sutton because he was lost, and it wasn't just in here in the second book that that was clearer than day. I had a great deal of sympathy for him. Maybe because we're both middle children and trying to find your place in the world you're in, but the man had his struggles, and while he made mistakes, love for family made him see the light of day. And then there was Emrys, and to be perfectly honest, I wasn't that much of a fan in the first book. Here, however? Well, the woman had me wanting to give her a standing ovation. She and Sutton were tested time and again, and they came out of it all stronger people. I was initially surprised by the ending; in hindsight, I think it was quite apt, especially for Sutton and Daye. Crownover gives us another five-star winner with Shelter, and can't wait for Escape! ♥