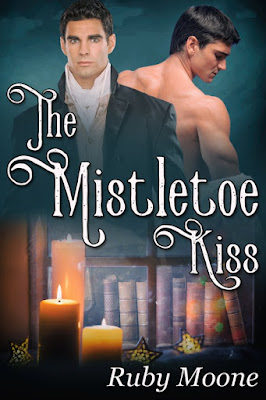 
About The Mistletoe Kiss
By 1816, widowed bookseller Lawrence Fenton has spent a lonely lifetime hiding who he is. He has convinced himself his feelings for his far too young, gorgeous, but troubled assistant Christy Shaw are nothing more than pride in his protégé and concern for his plight.

Lame since birth, Lawrence cannot imagine anyone wanting him, least of all Christy. But when Christy’s life threatens to spiral out of control, Lawrence steps in. Then Christy’s emotions spill over into a kiss under the mistletoe at Christmas. Will Lawrence be able to face the long-buried truth about himself and keep Christy by his side? 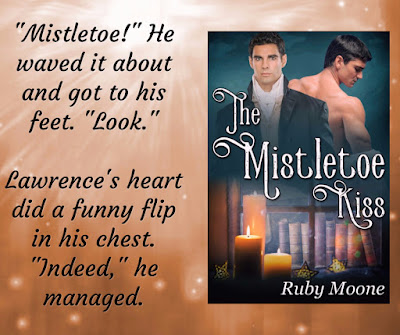 Read my five-starred review of The Mistletoe Kiss.

Add The Mistletoe Kiss on Goodreads. 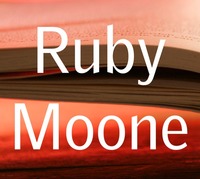 Ruby Moone lives in Lancashire in the northwest of England. All through school she was told she would never get anywhere if she didn’t stop daydreaming. Eventually it occurred to her to write down the daydreams, and voilà! The beautiful men in her head came to life. Ruby writes historical and contemporary gay romance but has a definite weakness for handsome men in billowing white shirts, breeches, and cravats. Oh, and she loves tea. Lots of tea.