Review: Can't Forget You by Rachel Lacey (Risking It All #3) 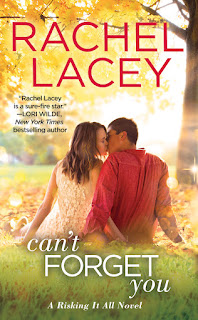 If this is the series ending that I suspect it is, then Rachel Lacey's Risking It All ends on a deservedly high note courtesy of the second chance romance that is Can't Forget You. Jessica Flynn, owner of The Haven Spa, and Mark Dalton, one-third owner of Off-the-Grid Adventures, both located in their hometown of Haven, North Carolina, have been supporting characters from the first full-length novel onwards, what with their respective best friends falling for one another. Now, the erstwhile couple, who begin this next chapter of their lives on opposite sides only to join forces and maybe, given a chance, rekindle a love that never really ended. But secrets may end them again.

When Mark left without a word of warning after high school graduation, Jess was at a loss. A decade later, Mark's time in the Army has come to a close, but he and his best friends are making a name for themselves with their adventure company, Off-the-Grid. He knew that returning to Haven with have him crossing paths with his ex-girlfriend, but Jess has made it clear that she doesn't really want to have anything to do with him. When the land both their businesses are after finds a third interested party, Mark suggests Jess join him and his friends in putting together a higher bid. From friends to lovers to exes and now partners, Jess and Mark seem to be headed in a direction that neither one of them is sure about. Falling into a relationship would be all too easy, but Jess knows what it's like to suffer a broken heart courtesy of Mark. Can she risk opening herself up if Mark remains closed off?

It was through this series that I was introduced to Rachel Lacey's writing, and it's been quite an enjoyable ride, enough that I'll definitely be checking out the author's back list and keep an eye out for her future releases. Jess and Mark's story isn't just about giving their love story a second shot but it's also about forgiveness and coming to terms with both one's past and their present in order to have any hope of a better future for themselves and whomever they choose to share their lives with. Mark is, indeed, quite reticent, and while he was frustrating at times, I understood why he didn't make himself as readily available emotionally as his best friends and the woman he loved. He may not be overly showy, but goodness, the man was loyal and he truly loved those closest to him, as proven to his dedication to Jess as she was going through her health woes. Theirs was a lovely second-chance romance, and I liked that the first three couples in the Risking It All series were around so we could check in and see how far they had all come in all their respective relationships. Can't Forget You was a true five-starred winner. ♥

Read my reviews for the Risking It All series: