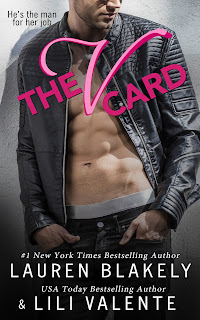 Note: This ARC was provided by the authors via InkSlinger PR in exchange for an honest review.

CJ, sweet, sexy CJ, is all grown up and bringing me to my knees.

Bestselling authors Lauren Blakely and Lili Valente have combined their forces for good, and what a good romantic comedic result their first effort turned out to be! The V Card is a standalone story with a number of familiar elements to it--friends becoming lovers, the best friend and the best friend's sister getting together, asking a close and trusted friend to help you punch that bothersome V card of yours, and putting a set number of days to an agreed upon period of getting it on. But Blakely and Valente have put their own spin to this mix of romantic tropes and story lines and the end result is a rom-com that tickled my fancy from the first chapter to the double epilogue.

Adored is Graham Campbell's baby, one that he and his best friend friend, Sean Murphy, brought to life together. With murmurings of selling the company to some faceless conglomerate swirling about, Graham needs to shore up some much needed support courtesy of Sean's younger sister, Caroline Jessica Murphy. When Sean was killed, his shares went to CJ, but she's also a business owner who's made a success of her accessory-manufacturing company. She knows what it's like to be wooed by someone looking to buy the very thing you've worked hard for and seeing that selling would be a mistake. CJ is more than willing to help Graham out, but in exchange for a particular favor...

Graham was seventeen when eleven-year-old CJ first crushed on him. Now twenty-five, she and Graham have their own firm friendship separate from the one he had with Sean. He's protective of her and would never do anything to purposely harm her, so he was her only candidate when she came up with the idea of getting rid of her virginity. His reputation for being the guy the women he's been with have never forgotten makes him someone that could teach CJ a thing or two when it comes to pleasing a man. It's just for seven days and it's nothing more than a business transaction of sorts. But when the lessons commence, will CJ's crush on her "teacher" lead to all out love?

I'm not entirely sure who wrote what in this book--though I suspect Blakely did Graham's part and Valente CJ's but I could be totally off-base here--but it doesn't really matter all that much because it's pretty clear that these two authors have formed a writing duo that I sincerely hope we haven't seen the last of. The story was a pleasure to read and had me happily entertained all throughout. Graham and CJ were equally fabulous main characters who had a true blue platonic relationship that developed into far more for both of them. But you know how it goes with stories like this one. Do they want to risk that very treasured friendship by bringing romantic feelings into the mix?

I couldn't find one single thing to gripe or complain about in this book. The writing was on-point, the development of the both the story and characters impressive, and the entertainment value had me wanting to stand up and give it a rousing ovation. I loved that even though Sean wasn't physically present, he remained such an important presence in Graham's and CJ's lives. The idea that Graham taught CJ the joys of making love while he learned the joys of falling in love from her is probably at the crux of this standalone, but in its entirety, The V Card is simply a romance book that I curled up with while wrapped in a warm blanket and promptly fell in love with. Five-plus stars. ♥