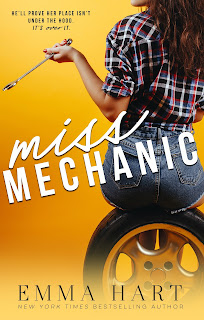 Miss Mechanic is the second in bestselling Emma Hart's gender role-flip stories and it pits a woman who learned the trade by her father's side in the garage they owned and a man whose grandfather ends up buying the garage and puts him in charge of it. Jamie Bell knows she's more than qualified for mechanic position at what is now Ryne Garages, but she isn't all that surprised when Dexter Ryne takes one look at her and bases his opinion of her capabilities on her gender and not on her qualifications. They come to an agreement: three weeks for her to prove just what it is she can do under the hood...but it may not take that long for him to want to take her on top of one.

I seriously wanted to smack Dex upside the head in the first few chapters of this book. Okay, no, let me amend that. I really, really, REALLY wanted to smack him for a good portion of the novel. I wouldn't necessarily call his way of thinking "old school". If anything, it was rather sexist. Now, I could get on my soapbox and go into this whole spiel about how women can do anything men can do and be better at it, but more often than not, stuff like that goes in one ear and out the other. Our dear Jamie, however, did things the right way--she showed Dex why she deserved a permanent job at the garage. In short, her actions spoke for her, but she still did a whole lot of talking.

Did Dex redeem himself? Yes, he did, and I'm glad that he saw the error of his ways. I didn't hate the guy. The whole enemies-to-lovers thing was on full blast here, and Emma Hart spun a story that had me cheering Jamie on before it belatedly made me want her with Dex. Once these two started getting "it" on, figuring out how they were going to deal sleeping with the person who pushed all their buttons proved to be really entertaining. A special mention goes out to their respective families who brought in some much appreciated sense and hilarity. While not my favorite Emma Hart release this year, I still enjoyed Miss Mechanic, which gets four out of a possible five stars. ♥