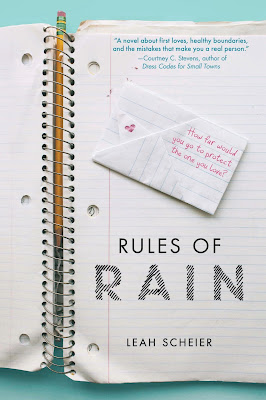 About Rules of Rain
How far would you go to protect the ones you love?

Rain has taken care of Ethan all of their lives. Before she even knew what autism meant, she was her twin brother’s connection to the world around him. Each day with Ethan is unvarying and predictable, and Rain takes comfort in being the one who holds their family together. It’s nice to be needed—to be the center of someone’s world. If only her longtime crush, Liam, would notice her too...

Then one night, her life is upended by a mistake she can’t undo. Suddenly Rain’s new romance begins to unravel along with her carefully constructed rules. Rain isn’t used to asking for help—and certainly not from Ethan. But the brother she’s always protected is the only one who can help her. And letting go of the past may be the only way for Rain to hold onto her relationships that matter most.

Add Rules of Rain on Goodreads.

An Excerpt from Rules of Rain
From Ethan's Journal:

The cholecystectomy was a successful operation. The predicted obstacles were not as difficult to overcome as expected. In the hallways, when the noise level became overwhelming, I utilized the breathing and relaxation exercises Rain taught me. When the surgeon took us to the operating room, it was a relief. The quiet voices, the unblinking light, the predictable, ordered routine. It’s as if the room was designed for me. After Dr. Peters dismissed us, I took a much-needed bathroom break. While I was in the stall, two medical students from our team entered.

“Let it go,” the one with the deeper voice said. “I don’t think he was trying to show off.”

“Who cares?” High Voice replied. “We’re the ones getting graded. You’d think he’d have realized he needed to shut up. I kept staring him down, but he was ignoring me. What a dick.”

Deep Voice laughed. “That kid sure knew his shit though.”

“People like that always know their shit,” High Voice said. “They’re basically walking computers. It sucks for me though. Today’s the end of the rotation, and I got showed up by a teenage robot.”

Deep Voice zipped up his pants and stepped over to the sink. The splashing water obscured the beginning of his reply. All I caught was his final statement: “I’d rather fail the surgery elective than spend a day in that boy’s life. I wonder what it’s like to live without emotions?”

High Voice made a snorting sound. “Whatever. How would he even know what he’s missing?”

On the way home from the hospital, I told Liam what I had heard. He didn’t say anything at first.

“Do you think I’m missing something?” I asked him.

He shook his head. “Of course not. Don’t let those morons upset you.”

“You don’t have to prove anything to anyone.”

He’s probably right. Still, I think it would be easier for me if I could explain what I was feeling. When I was little, I would just scream until my sister fixed whatever was bothering me. Rain once told me that I keep my emotions in a box, and that no one has the key to the box. I had no idea what that meant. So I said, “Rain, what are you feeling right now?” She started to answer me, and I interrupted her. “No. I want you to describe your emotions. But you have to do it in German.”

Here’s the thing: If she traveled to Germany she would still feel things. But she’d have to use big, weird gestures to show people what she meant because she doesn’t speak German. And no one would understand her, no matter how hard she tried.

After I asked her to describe her emotions in German, Rain was quiet for a little while. Then she wrapped her arms around herself and squeezed. She does that when she wants to give me a hug but can’t.

“You’re always in Germany, aren’t you?” 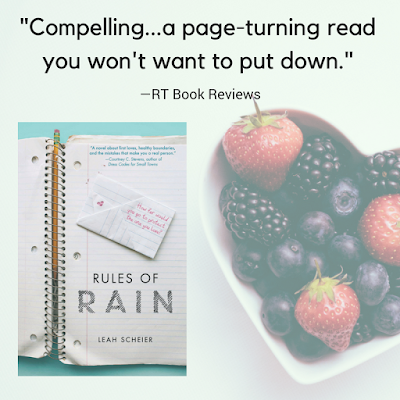 Leah Scheier works as a pediatrician and pens stories of romance and adventure. Her first novel, Secret Letters (Hyperion/Disney), received a starred review from School Library Journal and glowing reviews from Publishers Weekly, Booklist and VOYA. Her second novel, Your Voice Is All I Hear (Sourcebooks Fire), received a starred review from Booklist. Her latest novel is Rules of Rain (Sourcebooks Fire).

She lives in Maryland. Learn more at leahscheier.com.