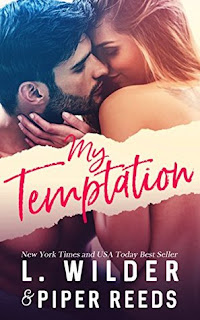 My Temptation is the first in the Happy Endings series and it's co-written by L. Wilder and Piper Reeds. I must say that I was pleasantly surprised while I was reading this quickie read. I'm familiar with Wilder's work, having read and enjoyed her Satan's Fury MC and Redemption series. I'm used to her angsty, darker reads, and I've loved them, but I do want to give snaps over the fact that this book was different in a good way. I read somewhere--Goodreads, I think--that this was originally written by Reeds alone and was released under the title of Indiscretions. I never got the read the original incarnation, so I can't really compare nor do I know the story behind the writing collaboration.

Dr. Seth Michaels is a therapist and Grace Parker is his newest patient. She comes to him with her issues regarding the men she dates. One session with him and she believes she's been cured, but then how does she deal with the fact that the one guy who ticks everything off her checklist happens to be none other than her therapist? The thing is, Seth is as attracted to her as she is to him, but there's no way that he could ever become involved with a patient. It's unethical. But the woman's proving to be a temptation, and with Grace's mother playing meddlesome matchmaker, Seth and Grace may end up giving in to everything they're feeling before they know what's hit them.

This was a pretty fun read, albeit really short one that I wish had been longer so that it could have fleshed out more of the story and there had been a wee bit more development. Seth and Grace had a connection, and I did enjoy reading their love story, but I confess that there was something hilarious about Grace's mother that had me remembering when my mom thought she knew best when it came to who I should be going out with. Yeah, those were fun times. Not. But more often than not, parents do know best, even when they start to get overly involved with their children's love lives. All in all, My Temptation was a novella that I enjoyed from start to finish. Four stars. ♥

Purchase My Temptation on Amazon.