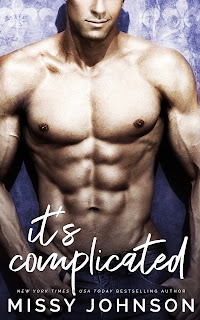 Missy Johnson launches her new series, Awkward Love, with a May-December love story between a twenty-two-year-old college student and her thirty-seven-year-old single father of two neighbor who just happens to be her father's best friend. It's Complicated finds widower Nick Jenson fodder for gossip. Well, more his being rather, erm well-endowed is what has tongues wagging. It seems he's been sending women he's been intimate with to the hospital. Think Cinderella's stepsisters trying to wedge their too large feet into Cinderella's dainty glass slipper, except replace foot with not-so-little Nick Junior and the footwear with women's meow-meow (this is me being inspired by journalist April D. Ryan's cutesy term for p***y). How's a guy like Nick supposed to find his second shot at love with every woman far more interested in hooking up and seeing if he's got the goods or if it's all fake news.

Of course, this has Anna (whose last name escapes me...though I don't think it was mentioned at all) curious. She's heard the rumors as well, and she gets ample proof after she spies her father's best friend stripping naked right in front of his window and gets a wee bit handsy with himself. This causes her to get all bashful and awkward whenever he's around. To make matters worse, her father volunteers her to help Nick out with his kids. Then Anna's caught peeking, and Nick makes it clear that he knows. So, what's a girl to do? Why, give the man who's got her all hot and bothered a show to enjoy as well. Yep, Anna's not so shy now. And then she is again. Or not. From peepshows to hot make-out sessions to kinda-sorta-maybe commitment, Nick and Anna got hurtling down their own awkward path to love. But things are about to get complicated when Anna's father finds out their dirty secret.

It's Complicated was simply...awkward. Anna was supposed to be this bashful, accident-prone, and clumsy young woman brimming with naivete and then she decides to go all stripper mode for her neighbor. Umm. Weird much? Then there was this almost unbelievable love story between her and Nick. I'm calling it "unbelievable" because I didn't feel any sort of substantial connection between them. And sheesh, the oversharing Anna was doing with her best friend. They aren't teenagers yet they snicker and gossip like they're preteens seeing boys naked for the first time. I didn't quite get the feeling that Nick and Dan, Anna's father, were truly these best friends who would do anything and everything for each other. Sigh. I desperately wanted to like this book, but it was more silly than it was sweet and more awkward than it was amorous. It didn't click with me, so I'm giving It's Complicated 2.5 stars. ♥

Purchase It's Complicated on Amazon.