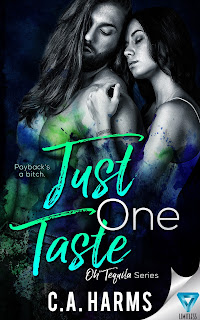 Two novels in and Oh Tequila is turning out to be my favorite C.A. Harms series. Because the series starter, Just One Chance, was as good as it was, the bar was set quite high for whatever was to follow. Happily enough, I can confirm that Just One Taste passed muster. If you were able to read the first book, you'll recall that we did get a peek at who the second one was going to be about, and Elijah, aka Eli or Red, was in for payback, which turned out to be the best kind of payout for him and the person whose name Elijah woke up to forever tattooed on his skin: Blake.

I won't go into too much detail in this review of mine in order to not be the cause of spoilage. What I will give you are the basics. Elijah is known for being a king among pranksters in his fraternity, but someone's got their sights set on his proverbial throne. When he wakes up one morning and discovers the name of some guy inked on him, he tries to recall the events that led to the debacle. To make matters worse, how is he going to explain who "Blake" is if Catherine, aka Cat and the girl he's interested in, ever sees it? No one said the aftereffects of tequila were boring.

This was such a fun-filled story, but it's also got some angst to it, courtesy of Cat's less than ideal home life. Eli and Cat proved to be an entertaining pairing, not just because it was such an unlikely one, but also because when everything was said and done, they just worked together. Having the rest of Eli's friends as well as Morgan and Xavier from book one made for an even more enjoyable read. I won't tell you how Eli resolves the whole "Blake" situation, but I do recommend you get a copy of the book to find out! Just One Taste is a winner and gets five stars. ♥

Purchase Just One Taste on Amazon.