Release Blitz: Only You by Kay Doherty 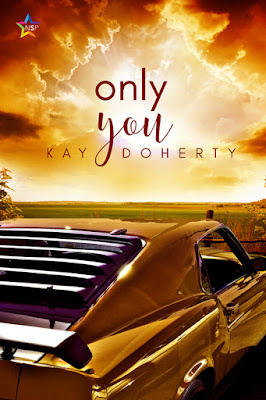 Only You
by Kay Doherty
Release Date: December 18, 2017
NineStar Press

About Only You
Case Holden hates his life. Made rich at a young age, he slipped into a lifestyle of partying with multiple boyfriends who only wanted to be with him for what he could give them. After confiding to his aunt that he’s miserable, she extends an invitation for a visit. Case plans to spend the time in small town Clover City to reprioritize and plant his feet on the road to happiness. He does not expect the Clover City sheriff to step into his world and wreak havoc on his emotions.

Two years ago, after the death of his partner, Rawley Kane moved to Clover City, trading the painful memories and big city madness for a less stressful existence. Even as sheriff, his life is uncomplicated and quiet. That is until Case Holden rolls into town and reminds Rawley just how lonely he is, and of everything he’s been missing.

Case is everything Rawley shouldn’t want. The man has six boyfriends and a life back in Denver, not to mention he’s quite a bit younger than Rawley. No matter what he tells himself, he can’t get enough of the young man. And Case has made it clear Rawley is the only one he wants. Now if they could just get past Rawley’s guilt and Case’s insistent boyfriends, they just might stand a chance.

Read my four-starred review of Only You.

Add Only You on Goodreads.

An Excerpt from Only You
Smoke billowed from beneath the hood of Case Holden’s Mustang as he slowed, easing to the side of the road, where the engine gave a final rattle before dying. Case did his best to maneuver the car completely off the pavement to avoid getting hit by other vehicles. Rain was coming down in sheets, and he cursed when he felt one of his tires come to a sudden halt in the mud along the shoulder of the road. He was on a remote country byway and hadn’t passed another car in quite a while, but he still didn’t want to risk anyone knocking into his baby with the limited visibility caused by the downpour. This Mustang was his pride and joy. He had spared no expense when he bought the car, adding every luxury available. Though he was careful to keep it in pristine working order, this trip had pushed the vehicle to its limit.

Case didn’t know a damn thing about cars. He had entrusted the Mustang’s mechanical issues to one of his many boyfriends—a boyfriend who was just one of many reasons he was making this drive. Case had become a partying drunken slut in the past several years, hemorrhaging money. Now, because of choices made and paths taken, he was stranded in the middle of nowhere in the pouring rain. He lifted his cell phone out of the middle console and let out another string of expletives. There was no service and the battery was about two seconds from dying.

When he finally managed to arrive at his aunt’s house, he was going to have a discussion with her about her choice of address. The last time he visited his Aunt Sylvia, he had fallen in love with her cozy house and the massive amount of land he’d been allowed to explore for hours on end. He didn’t remember the drive being so long and desolate, though. Sylvia and her late husband, Ed, had bought the acreage with the hopes of starting a ranch, but that idea had died a quick death shortly after they had moved into the two-bedroom cabin. The house was situated at the edge of a forested area, with an awesome lake for fishing within walking distance, but the cabin itself had been in need of serious attention.

Two years and hundreds of thousands of dollars later, Sylvia and Ed had basically rebuilt the place. When Case last visited at age fifteen, it had been state of the art with all the modern amenities and taken every dollar his aunt and uncle had put away for the ranch. It had been ten years since Case was out this way. He’d slept in the back seat for the majority of the drive during that family trip, which he now knew he preferred after being alert, painfully aware of every boring mile traveled. It was mind-numbing. Case allowed the engine to cool for several long minutes before he turned the key in the ignition. The engine made an awful grinding noise but never caught. He gave a few more futile attempts before slamming his palms against the wheel in frustration.

“Damn, damn, damn. What the hell am I supposed to do now?” he yelled to the empty seats. He was out in bumfuck nowhere, alone, with a dead phone and a dead car. He was a city boy surrounded by the most up-to-date electronics, none of which were any use to him. He twisted in his seat and looked down the road behind him and then slowly turned to look out all the windows to assess his options and found zero. There were no houses, no traffic—nothing but rain and flat terrain as far as the eye could see. Admittedly, that wasn’t all that far at the moment. He stuffed his phone into his bag, jerking his jacket on with angry motions. The chances of another car coming upon him and actually stopping were slim to none. Walking seemed to be his only option since he couldn’t call anyone for help.

Case grabbed the strap of his bag and dragged it across the seat as he got out of the car. Once he was free from its confines, he slung the strap over his shoulder and locked the doors. Rain instantly soaked through his jacket, droplets sliding down his neck onto his chest and back, making him shiver. He stuffed his hands into his pockets, ducked his head against the occasional gust of wind, and started walking, hoping like hell there was a house or gas station or something with a phone in the near distance. After almost losing a shoe to the sucking mud that lined each side of the two-lane highway, Case decided to risk walking on the pavement. Since there hadn’t been a car in recent memory, he figured he was safe.

Only You
Kay Doherty © 2017
All Rights Reserved 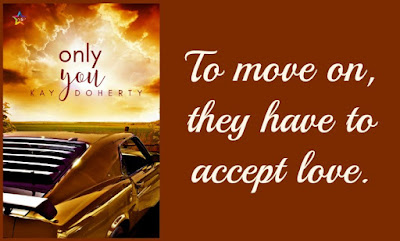 About Kay Doherty
Kay Doherty lives in Colorado with her husband and their animal children. Family is important to her so there are weekly visits to her parents and frequent text messages with her brothers. She has a severe addiction to coffee and Mexican food. She loves to read and write and can easily become consumed by it for hours, much to the dismay of the husband and dogs. On occasion, she can be convinced to venture out into world of the living.