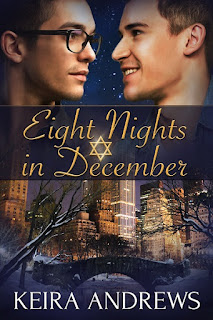 After the charming Christmas novella that Keira Andrews released last week, she's giving fans and readers a Hanukkah story! Eight Nights in December has twenty-year-old Lucas McKenzie prepared to spend the holiday break alone in his dorm room. With his beloved father having passed away just a few months ago, Lucas is truly alone. But when Lucas's roommate's mother unexpectedly invites him to be their guest and ends with a whole new roommate in the New York home of the Kramers--that of his college roommate's younger brother, twenty-one-year-old Nathaniel. With Nate, Lucas feels like he's able to explore that part of himself that he's kept buried, focused on taking care of his father and then with all of school responsibilities. All Nate is looking for is a holiday hookup, but with a connection like the one he shares with Lucas, could there be more than eight nights for them?

This was every bit as sweet as I expected it to be, and yet it was also everything else I hoped it would be. Lucas and Nate may have looked like they had nothing more in common other than their being gay. Nate was in the closet when it came to his family, and their faiths were different. However, they were both on paths that they chose out of what they believed would make their parents happiest. Neither one may have been in the market for a boyfriend in those few days together, but when it comes to love, no one ever said there was a fixed period of time when feelings blossom. One of my favorite things about this novella was that it was about hope and how things do not necessarily have to continue the way they are because that is what is expected. Eight Nights in December is a story of being true to yourself, the miracle of love, and the acceptance of family. This one is a 4.5-starred novella. ♥