Review: Can't Get Enough by Gena Showalter (The Original Heartbreakers #6) 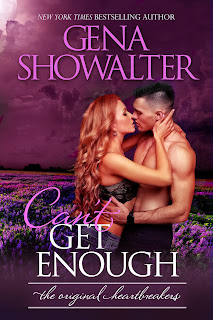 It's only been a little over a month since the release of the fifth full-length novel--sixth release, overall--in Gena Showalter's The Original Heartbreakers series, but she's back and she's giving fans and readers the seventh heartbreaker in the town of Strawberry Valley via her first foray into self-publishing, Can't Get Enough. Twenty-eight-year-old former Army Ranger Brock Hudson has a reputation for never being with the same woman for very long, and by very long, we're talking about a day or two here. That doesn't mean, however, that he doesn't have his sights set on one particular woman, that woman being twenty-six-year-old kindergarten teacher Lyndie Scott. The woman he's nicknamed "Scottie" plays the starring role in every single one of his fantasies as of late. Sure, they've finally forged a friendship, and Lyndie no longer looks like she's ready to run in the opposite direction whenever he's around. So, when's Brock's estranged father passes away and includes his elder son get married in order to claim control over the multi-million-earning family company, there's no one else that Brock would consider asking to be his temporary wife. In return, however, she doesn't want money. Nope, she wants just one thing for her "I do"--Lyndie wants Brock to sex her up and make a baby.

I can't believe we're at the last of the second trio of couples of Strawberry Valley already! Brock and Lyndie have come so far in terms of their friendship in this book, and that's one of my favorite things about this. Yes, there's romance, and yes, there's sex, but there's genuine trust and respect plus a whole lot of friendship that goes on, which all make for a pretty strong foundation for these two. Lyndie is on firmer footing, refusing to remain the victim of her late father's and late husband's years of abuse. On the other hand, Brock's own past with his family--his mother, in particular--had my heart squeezing in empathy. Seriously, no one deserves to be made to feel unworthy, especially by the person who's supposed to love them unconditionally even before they're born. Sigh. I loved how these two came together and became each other's greatest source of support while continuing to have their nearest and dearest around them. My one complaint would be that there are several things that happen off-page with regards to Brock's family and company, and it would have been nice to see that all play out instead of merely being told what happened. Even with the LPH guys now all happily attached, I'm still hoping we haven't seen the last of this town...but even a neighboring one will do! 4.5 stars. ♥

Read my reviews for The Original Heartbreakers series: