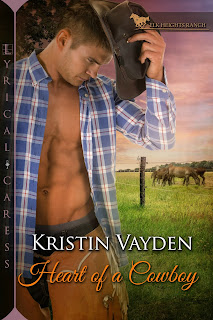 Note: This ARC was provided by Kensington Books in exchange for an honest review.

Heart of the Cowboy is my first full-length read from Kristin Vayden, and it's the first in her Elk Heights Ranch series under the Lyrical Caress imprint from Kensington Books. It's the story of a palliative caregiver of an end stage cancer patient and the estranged son of the patient who comes home after too many years away. At twenty-six, Laken Garlington may be seen by many as too young to be a hospice care nurse, but it's a vocation that she takes to heart. Her latest client is Jackson Myer has been diagnosed with adenocarcinoma and given three months. Instead of prolonging his life by a handful of months but saddled with too many drugs, Jack would rather spend his remaining time at home. His one hope is to have his son, Cyler, by his side, but even as Cyler gets his father's call about his cancer, Cyler isn't all that interested in forgiving his father for what led Cyler to leave home at twenty-one. But maybe returning to the ranch will allow him to make sure the old man is actually dead and buried. When he meets his father's nurse, however, everything begins to change--for him, for Laken, and for the father he hates.

This is one of those books that leaves me torn. For most of it, I felt an odd sort of detachment to the main characters, not really getting the kind of connection between them that I require in the romance novels I read. I have to believe that they're in love with one another, and I didn't get that feeling until nearly the end of the book. I also wasn't a fan of the fact that for a palliative nurse, Laken seemed to just up and leave her patient to go get her caffeine fix. Maybe it's different in other countries, but here, based on my own personal experience, caregivers like her don't leave their patients unless they're sure there's someone actually present with the patient. It just didn't sit well with me, especially because she isn't a regular nurse who can come and go whenever. But maybe it's just me.

Then there was Cyler, whose reasons for leaving and staying away were more than understandable. To be honest, when Jack tried to explain why he did what he did, it came off as more of him just excusing it as his being a guy and that's what guys do. Sigh. But again, the whole detachment thing on my end made it difficult for me to become emotionally invested. Vayden's writing is commendable, but I do wonder about the series title because not once was "Elk Heights Ranch" mentioned in the story. Was that the Myer ranch? Why not name the series after the town of Ellensburg, given none of the supporting characters who could be featured next in the series had any connection to the ranch? But I digress. Heart of a Cowboy did get interesting in the last few chapters, so 3.5 stars. ♥

Purchase Heart of a Cowboy on Amazon | B&N | iBooks | Kobo.