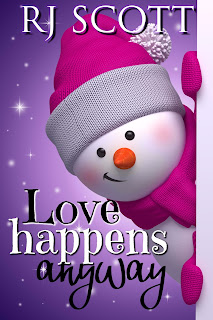 Sweet with a dash of angst, RJ Scott's new novella hits the holiday spot quite nicely. Love Happens Anyway is the story of advertising executive Derek Henderson and bar owner Luke Davers. Derek has a boyfriend named Marcus, and Marcus is everything he could possibly want in a man--gorgeous and selfless, a firefighter with a penchant for putting other people--and kittens!--first. There's just one problem... Marcus doesn't exist. He's been created by Derek to fend his parents off, ensuring them that he's happy and in love and doesn't need them to worry about finding a partner who will be by his side. Now, though, his parents want to meet Marcus. So, what's a guy to do? Why, hire someone to pretend to be Marcus, of course! And while Luke may not be an AlGetz employee, his best friend owns the company AND knows just how much Luke needs the money to pay off all of debts his family's bar, Halligans, had accumulated. A mere five dates for thirty thousand dollars. By the end of their arrangement, Luke will have his money and Marcus and Derek break up. It's a done deal that turns complicated when love happens.

I've enjoyed almost every single book of RJ Scott's that I've read ever since I discovered her writing a couple of years ago, and Love Happens Anyway falls in the category of favorites. From the adorable cover (seriously, that blushing snowman and the colors is too cute for words!) to the chemistry between the main characters, this was a quick holiday read that left me with a smile on my face. There's even enough angst to make me a happy camper. Yes, I'm not exactly a fan of the whole fake relationship story line, but I make exceptions when the story is written well, and that's the case here. While Derek's motivation for making Marcus up may seem shallow, I absolutely understood where he was coming from. He didn't want to tell his parents off and creating Marcus was the least terrible option in Derek's head. There was more to him and to Luke as well, and I liked getting to peel back all those layers and saw that they were even more interesting than they were initially. Scott gives her fans and readers a cute love story along with a reminder about the importance of family. I'm handing Love Happens Anyway five stars. ♥