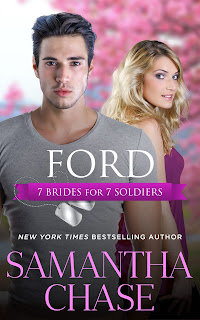 Ford is the seventh and final book in the multi-authored 7 Brides for 7 Soldiers series. Samantha Chase not only brings readers the story of thirty-year-old former US Naval Construction Battalion or Seabee Ford Garrison but brings full circle the stories told in the town of Eagle's Ridge and the seven best friends who returned home after serving in various branches of the military. He's paired up with twenty-six-year-old kindergarten teacher Callie James, who happens to be the daughter of the woman who cleaned Ford's grandparents' home and ranch for years. She's sweet and has always considered Eagle's Ridge her home. On the other hand, Ford's life goal was to get away from their hometown, wanting to make a name for himself, free of small-town gossip and expectations.

After his beloved grandmother suffers a mishap in her home, Ford returns to Eagle's Ridge, hoping to limit his stay to as few days as possible. He wants to get his grandmother's house fixed up and then stay until after the holidays and then go back to Virginia. But the list of what needs to be repaired and replaced seems to keep getting longer, meaning Ford is staying longer in Eagle's Ridge as well. But as much as he wishes he could up and leave, spending time with his grandmother, catching up with his six closest friends, and working on the house he loves aren't exactly a downside to being in town. Then there's Callie, who's done a lot of growing since he last saw her twelve years ago. She's a distraction he never accounted for, but could she be the ultimate reason he stays or goes again?

Okay, I'm going to be brutally honest here: I did NOT like Ford. I got his reasons for leaving and staying away from his hometown, but seriously, after his best friends and the girl he's falling for point out why his reasoning is flawed, he still persists on being like a horse with blinders? Ugh. The fact that his not wanting to stay in Eagle's Ridge wasn't exactly a secret was just sad, and it was as if he refused to see it from anyone else's point of view until his father made him see things more clearly. On the other hand, I liked Callie, although her crush on Ford made her romanticize what they had, which had her setting naive expectations. My favorite thing, though, had to be the epilogue and the revelation regarding the oft-mentioned Miss Woody (aka Diana Woods). I'm giving Ford 3.5 stars. ♥