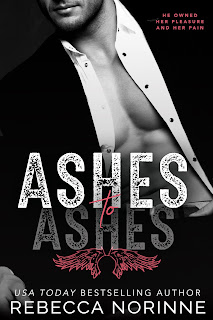 I've read and loved Rebecca Norinne's rugby romances, but I was curious to see how she would do with this latest release of hers. (Yes, yes, I know she's written other non-rugby love stories, but I haven't gotten around to reading her backlist yet.) Well, unsurprisingly, she did rather well, if I do say so myself. Ashes to Ashes is the story of a superstar in the world of country music and the bodyguard who protects her from anyone and anything that may seek to do her harm. Oh, and did I fail to mention that they hooked up the year before they saw each other again as protector and protectee? With romance, sex, and some mystery suspense, this standalone was an entertaining read which proved Rebecca Norinne is an author who knows her romance writing way on and off the rugby pitch.

Heartbreak is often sung about in country songs, but Rae Griffin never thought she'd actually experience it herself, and in such public and humiliating fashion, courtesy of her equally famous husband. Her world spirals out of control, and Rae drowns her sorrows in alcohol and hookups. But among all those meaningless moments, one stands out. A couple of years later, Rae's life and career appear to be back on track. However, she's the target of those who prefer to believe her ex's version of events, and there's one individual in particular who is intent on doing her harm. The only viable solution is for her to have a bodyguard, but she never dreamed that the one assigned to her would be none other than Ash Deveraux, the same guy with whom she shared one unforgettable night. Ash will protect Rae from her enemies, but who will protect her heart from Ash and all the secrets he keeps?

Rebecca Norinne has always been able to bring the romance, but that added element of suspense in this new release of hers kept me engaged even more. Rae and Ash were downright combustible and I liked that they were as flawed as they were. These weren't perfect people living perfect lives. Nope, they had their struggles and were constantly keeping their issues in check without whining about it. Rae made some bad choices but she learned from her mistakes, and Ash was a man who appeared stoic and closed-off yet opened himself up to the possibilities of having a happier life with Rae. After reading Ashes to Ashes, I'm determined to check out the the author's backlist to see if there are any hidden treasures awaiting my perusal. This new standalone gets 4.5 stars. ♥