Book Spotlight: Between the Blade and the Heart by Amanda Hocking 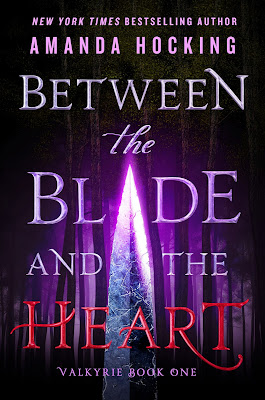 Between the Blade and the Heart
(Valkyrie #1)
by Amanda Hocking
Release Date: January 2, 2018
Wednesday Books

About Between the Blade and the Heart
Game of Thrones meets Blade Runner in this commanding new YA fantasy inspired by Norse Mythology from New York Times bestselling author Amanda Hocking.

When the fate of the world is at stake, loyalties will be tested.

Valkyries have one great responsibility: to return immortals to the afterlife by slaying them. As one of Odin's Valkyries, Malin has always known that the balance of the world rests on her ability to carry out orders. But when Malin discovers that her mother spared the life of an immortal who was destined to die, her world is thrown into chaos.

Malin not only wrestles with the knowledge that her mother might not be who she thought—she’s also thrust into the path of a gorgeous blue-eyed guy named Asher who needs her help slaying the rogue immortal who destroyed his family. The balance of the world is at stake. And, as Asher competes with Malin’s ex for her love and loyalty, so is her heart.

Add Between the Blade and the Heart on Goodreads.

An Excerpt from Between the Blade and the Heart
ONE

The air reeked of fermented fish and rotten fruit, thanks to the overflowing dumpster from the restaurant behind us. The polluted alley felt narrow and claustrophobic, sandwiched between skyscrapers.

In the city, it was never quiet or peaceful, even at three in the morning. There were more than thirty million humans and supernatural beings coexisting, living on top of each other. It was the only life I’d ever really known, but the noise of the congestion grated on me tonight.

My eyes were locked on the flickering neon lights of the gambling parlor across the street. The u in Shibuya had gone out, so the sign flashed SHIB YA at me.

The sword sheathed at my side felt heavy, and my body felt restless and electric. I couldn’t keep from fidgeting and cracked my knuckles.

“He’ll be here soon,” my mother, Marlow, assured me. She leaned back against the brick wall beside me, casually eating large jackfruit seeds from a brown paper sack. Always bring a snack on a stakeout was one of her first lessons, but I was far too nervous and excited to eat.

The thick cowl of her frayed black sweater had been pulled up like a hood, covering her cropped blond hair from the icy mist that fell on us. Her tall leather boots only went to her calf, thanks to her long legs. Her style tended to be monochromatic—black on black on black—aside from the shock of dark red lipstick.

My mother was only a few years shy of her fiftieth birthday, with almost thirty years of experience working as a Valkyrie, and she was still as strong and vital as ever. On her hip, her sword Mördare glowed a dull red through its sheath.

The sword of the Valkyries was one that appeared as if it had been broken in half—its blade only a foot long before stopping at a sharp angle. Mördare’s blade was several thousand years old, forged in fires to look like red glass that would glow when the time was nigh.

My sword was called Sigrún, a present on my eighteenth birthday from Marlow. It was a bit shorter than Mördare, with a thicker blade, so it appeared stubby and fat. The handle was black utilitarian, a replacement that my mom had had custom-¬made from an army supply store, to match her own.

The ancient blade appeared almost black, but as it grew closer to its target, it would glow a vibrant purple. For the past hour that we’d been waiting on our stakeout, Sigrún had been glowing dully on my hip.

The mist grew heavier, soaking my long black hair. I kept the left side of my head shaved, parting my hair over to the right, and my scalp should’ve been freezing from the cold, but I didn’t feel it. I didn’t feel anything.

It had begun—the instinct of the Valkyrie, pushing aside my humanity to become a weapon. When the Valkyrie in me took over, I was little more than a scythe for the Grim Reaper of the gods.

“He’s coming,” Marlow said behind me, but I already knew.

The world fell into hyperfocus, and I could see every droplet of rain as it splashed toward the ground. Every sound echoed through me, from the bird flapping its wings a block away, to the club door as it groaned open.

Eleazar Bélanger stumbled out, his heavy feet clomping in the puddles. He was chubby and short, barely over four feet tall, and he would’ve appeared to be an average middle-¬aged man if it wasn’t for the two knobby horns that stuck out on either side of his forehead. Graying tufts of black hair stuck out from under a bright red cap, and as he walked ahead, he had a noticeable limp favoring his right leg.

He was a Trasgu, a troublemaking goblin, and his appearance belied the strength and cunning that lurked within him. He was over three hundred years old, and today would be the day he died.

I waited in the shadows of the alley for him to cross the street. A coughing fit caused him to double over, and he braced himself against the brick wall.

I approached him quietly—this all went easier when they didn’t have time to prepare. He took off his hat to use it to wipe the snot from his nose, and when he looked up at me, his green eyes flashed with understanding.

“It’s you,” Eleazar said in a weak, craggy voice. We’d never met, and I doubt he’d ever seen me before, but he recognized me, the way they all did when their time was up.

“Eleazar Bélanger, you have been chosen to die,” I said, reciting my script, the words automatic and cold on my lips. “It is my duty to return you to the darkness from whence you came.”

“This is not my decision to make,” I said as I pulled the sword from my sheath.

His eyes widened as he realized I couldn’t be bargained with. For a moment I thought he might just accept his fate, but they rarely did. He bowed his head and ran at me like a goat. He was stronger than he looked and caused me to stumble back a step, but he didn’t have anywhere to go.

My mother stood blocking the mouth of the alley, in case I needed her. Eleazar tried to run toward the other end, but his leg slowed him, and I easily overtook him. Using the handle of my sword, I cracked him on the back of the skull, and he fell to the ground on his knees.

Sigrún glowed brightly, with light shining out from it and causing the air to glow purple around us. Eleazar mumbled a prayer to the Vanir gods. I held the sword with both hands, and I struck it across his neck, decapitating him.

And then, finally, the electricity that had filled my body, making my muscles quiver and my bones ache, left me, and I breathed in deeply. The corpse of an immortal goblin lay in a puddle at my feet, and I felt nothing but relief.

“It was a good return,” my mother said, and put her hand on my shoulder. “You did well, Malin.”

Copyright © 2018 by Amanda Hocking in Between the Blade and the Heart
Reprinted by permission of St. Martin’s Griffin.