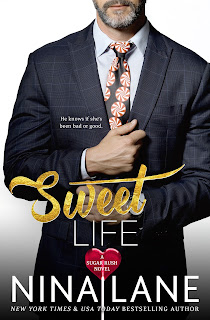 “You saved me. After the accident, I didn’t know how I’d ever be there for the boys again. Then you walked into Hailey’s hospital room and reminded me I had seven reasons to keep living. You gave me an eighth reason. Like you were a light showing me the way out of the dark. You proved that love doesn’t stop when someone leaves you. I’ll always love her. And here, now, in this life, I love you.”


Who wouldn't want to spend the holidays over at Indigo Bay, California with the Family Stone? No, not the musical group. I'm talking about the supremely sweet Stones who own Sugar Rush, a generations-old and family-owned candy company currently led by the patriarch, Warren Stone. A widower for nearly fourteen years, Warren is father to six sons and one daughter. After losing his beloved wife, Rebecca, in a car accident, the woman who's been by his side providing support is his sister-in-law, Julia Bennett. She was only fourteen when nineteen-year-olds Rebecca and Warren had begun dating, marrying the year after. Since her sister's passing, she's tried to be the best aunt possible to her nephews and niece and she and Warren have forged a treasured friendship beyond measure.

Julia appreciates the care and concern Warren's always shown, but she doesn't appreciate his firing her from her usual duty of planning the holiday festivities for Sugar Rush. All Warren wants to do is see Julia slow down, which is exactly what he's trying to do in his own life, choosing to retire early, regardless of the grumblings from his kids. But when an unexpected night together has him wanting to take things between forward and fast, the two will have to decide if they're willing to take their relationship to a whole new level--one that may be hindered by the memory of Rebecca and the feelings of Warren's seven children. Julia may have a list of all the things she wants to do before turning fifty, which is soon, but falling in love with her sister's husband can never EVER be one of them.

When I found out that the fifth Sugar Rush novel was going to be about Warren, I literally clapped my hands in glee. It was such an unexpected delight to have him in the spotlight this time around. Who said his kids were the only ones who deserved happily-ever-afters? Yes, he had already experienced true love right along marriage and fatherhood with his late wife, but it's been thirteen years since she died and there's no law against falling in love again, even if it is with his sister-in-law. And seriously, this isn't as taboo as some people may think. It's not like they were having some illicit affair all along. Both Warren and Julia are single and it was about time that they get on and mingle. Julia being the woman he was paired with was a surprise, but it was definitely a most welcome one.

One of my favorite things about this book in particular and the series as a whole has been Nina Lane's ability to keep things light while still giving angst-addicted readers like me their fix without overdoing it. If you've read her Spiral of Bliss series, which is one of my all-time favorites, you'll see and appreciate how different that is to the Sugar Rush novels. I'm not saying I prefer one over the other because that would be like me being forced to choose between bacon and shrimp--in short, way too impossible and unfair--but what I am saying is that I love that Lane is an author who has proven she isn't a one-trope pony. With their father's story told, I can't wait to see who among the remaining single Stone siblings is up next. For now, relish the five-plus-starred Sweet Life with Warren and Julia. ♥

Read my reviews for the Sugar Rush series: