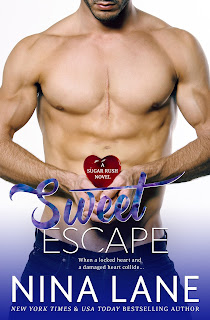 For thirty-one years, he'd believed his heart wasn't whole enough to give away, that he couldn't trust it. And then from the moments their hands touched, Hannah had proven him wrong. He just hadn't wanted to admit it.

She had made him complete, healed him, enforced his urge to live with every fiber of his being. He had always belonged to her, just as she belonged to him.


At twenty-eight, Hannah Lockhart has spent a decade traveling the world, discovering new and wondrous things, and writing all about love on her blog, Lock Heart. Now though, she's back in her hometown of Rainesville, California to take charge of her sister Polly's bakery, Wild Child, while Polly takes a pastry-making course in Paris. When a whipped cream fiasco leads to her bidding--with money she didn't have--on thirty-one-year-old Evan Stone, brother of Polly's fiancé, they seal the her win with a kiss unlike any other kind of kiss she's ever experienced before. Their connection is sealed, but neither one of them is looking for a relationship, not with Hannah leaving Rainesville once Polly returns, and certainly not Evan, who's picked up the nickname "Heartbreaker" because of his refusal to commit to any woman. They begin to spend more time together, sharing secrets with one another, all while trying to keep things purely platonic. However, their connection is too powerful to ignore, evolving from being friends to lovers. But will Hannah and Evan's sweet beginning lead to a bitter end?

Hannah Lockhart and Evan Stone were the two most memorable supporting characters from the Sugar Rush series starter, Sweet Dreams. With Hannah's younger sister Polly and Evan's older brother Luke now happily engaged and spending a few months together in Paris, in the second novel, Sweet Escape, the spotlight is solely on their siblings who have spent years trying to outrun the perceived realities of their respective lives. Evan's heart problem and Hannah's wanderlust were touched upon more than once in book one, and in this sequel, readers learn the back stories and how their pasts have made them into the people they are together. I confess that I wasn't much of a fan of Hannah's in the first book, not with the way she seemed to shirk responsibility and purposely distanced herself from her late mother and younger sister. While I still don't agree with what she did, I do have a better understanding of her motivation and she more than redeems herself here. With Evan, she's found home, which is something a wanderer like her may not openly admit she was looking for, not till it was right there waiting for her.

Ah, Evan. Where do I begin with this guy?! He was the unique combination of adorably nerdy--because of all this stock knowledge he had with regards to sweets and linguistics--and romantically sexy--because of how he treated Hannah while they were together, before and after the whole aspect of love entered the picture. He was someone whose reality was difficult to escape so maintaining control over his feelings and refusing to give his heart to anyone was something he could handle. That is, of course, until he met Hannah. I loved these two together because they seriously brought such perspective to the other and made no prejudgments as to how they chose to live their lives. This novel was just as good as its predecessor, and this series is already a favorite, so I'm really looking forward to getting my hands on the third book once it's out and hoping that it'll be about Adam. On a side note, I loved the inclusion of a Filipino word in the story, although it was misspelled ("gigli" instead of "gigil"). So, I'm going to be using that to end this review. Sweet Escape was totally nakaka-gigil and I'm giving it five-plus stars. ♥

Read my reviews for the Sugar Rush series: