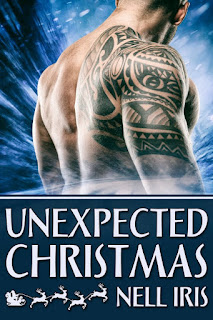 
Nell Iris's holiday novella, Unexpected Christmas, was an unexpectedly heartwarming treat of a read. I had previously read and loved her neighbors-to-lovers short story in the multi-authored Make the Yuletide Gay anthology, The Christmas Day Date, but I was surprised she had another Christmas-themed story up her sleeve! This time around, she's got two men whose paths would've probably never crossed had a forgotten coat, winter conditions, and fate had not intervened. Sometimes, the best Christmas presents are the ones you do not expect.

Daniel Erickson had no intention of spending what was left of his Christmas with his homophobic uncle, but walking out of his mother's house without a coat to shield him from the mind-numbing cold of winter was definitely ill-advised. When a huge truck with an equally huge guy behind the wheel offers him a ride, Daniel is wary. The man was wielding an ax--not the kind that could hack him into pieces, but the name Ax, aka Axel Wilson. In a matter of hours, Daniel learns that not all gifts come wrapped and that love comes when you least expect it.

This quickie read hit the spot at a time when I have a lot going on, thanks to the Christmas and New Year season. Daniel was a presumptuous in the beginning, but he learned really quickly to not judge people based on what they look like. I guess you could say Ax was like looking at a gift wrapped in brown paper and twine only to realize that once you open it, it's utterly priceless and life-changing. This book was as much about falling in love as it was about family, and it has definitely become my favorite read from Nell Iris so far. Unexpected Christmas receives 4.5 stars. ♥