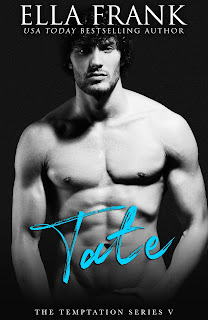 “Never think for one second I have ever thought anything other than the world of you. Because it wouldn’t be true.”

Tate’s throat choked up at the sincerity of those words, and then he reached for Logan and kissed him hard. “I feel exactly the same way about you.”

“You better,” Logan said against his mouth.


If you thought you knew where this fifth and latest Temptation novel was going to go, especially after Logan gave us all a glimpse of where his thoughts where headed, well, buckle up, my fellow L&T lovers and bookaholics, because Ella Frank takes us on one hell of an emotional roller coaster ride. In writing this review, I'm going to assume that you've already read the first four novels—Try, Take, Trust, and Tease—and if you haven't, might I suggest that you get right on that. I learned my lesson after devouring the first three books in one sitting, all in anticipation for the fourth one's release several months ago. If you're new to the series, please take note that you do need to read these books in order. There were originally three, but the trilogy spawned an extra three novels, so now we've got ourselves a deliriously decadent sextet (pun not intended but oh-so-fitting, if I do say so myself).

Fair warning: I'm going to be mentioning things here that aren't necessarily spoilers, IF you've read the first four books; but if you haven't, then yes, they could indeed be seen as all spoilery. Feel free to continue either way, but I just wanted to throw out that word of caution before we get on to all the wonderfulness of Tate, which has Logan Mitchell and Tate Donovan moving forward but also needing to settle a few things leftover from their pasts, Tate's in particular. You see, book five in the Temptation series finds one of my all-time favorite M/M couples in transition. They're moving from a condo to a detached house, the law firm Logan co-owns with his brother is expanding, and Tate's estranged sister making efforts to reconcile. Logan and Tate are making plans for their future together, except Logan has one particular plan that he has yet to talk Tate about, and it's a doozy of a plan indeed!

Okay, I'm totally trying my best to hold back from adding anything else. Ever since I finished reading the advanced copy of this when Ella Frank set it free on eager beaver bloggers like myself, I've had a very limited number of people I've been able to fangirl with and express whatever frustrations to and showcase my felicitations towards. It hasn't been easy, but then that's what happens when I've been so taken by L&T from the moment I met them in the first book. Following their journey over the span of the currently available five books makes me feel privy to the highs and lows of their love story, so when one or both of them hurts, I feel this tightening in my chest, and feel a need to lash out at whoever's hurt them. Of course, when something good occurs in their lives, I want to be the first to whoop and cheer and throw them a party if they were actual living and breathing individuals in real life.

Here's the thing with this fifth book: it tests your resolve as a reader of this series. Logan and Tate are far from perfect, and that's been on full display from the get-go. Yes, they're together, and yes, they're happy and in love, but their lives continue to have its challenges, both as separate people and as a couple. Not everything Logan does is going to be met with approval (no matter how much he wishes to believe otherwise), and same goes for Tate. The thing is, Logan has always been the guy who doesn't like being boxed in or dictated upon, and that's made many see him as the "naughty" to Tate's "nice", the bespectacled bad boy lawyer to the curly-haired good guy bartender. And just like their relationship is tested here, so are certain preconceived notions of L&T. At the end of the day, they are who they've always been and they love each other, warts and all, as do I. Love ALWAYS wins out.

I'm scrolling up and realizing that this is probably one of the longest reviews I've written this year and that often means one of two things: I really, really, REALLY didn't like it and have things to rant about OR I really, really, REALLY loved it and I can't seem to shut up about how much I adore the book. If you haven't picked up on it yet, it's the latter, and if Ella Frank wasn't already a go-to author of mine, this book would have clinched it. She's made Logan and Tate feel so damn real that I'm absolutely all in with these men, thoroughly invested in what happens in their lives. This ends on a cliffhanger, but shocker of shockers, it wasn't an evil one. I'm not even going to complain about having to wait till January for the sixth and--gulp!--supposedly final book (I'm still holding out hope for more). I went to sleep with Tate and woke up still perfectly sated. This is one serious, five-plus-starred must-read. ♥