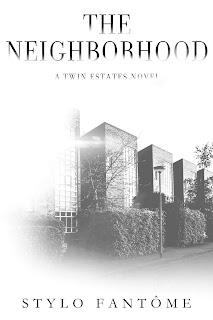 Hmmm... Not sure how I really feel about this second novel in author Stylo Fantôme's Twin Estates series. I really liked Neighbors, the series starter, and had high expectations as to where the author would take the three main characters--Katya Tocci, Liam Edenhoff, and Wulfric Stone--especially with the way things ended among these three neighbors. While my guess as to who she would end up with did come to pass, getting to that point felt drawn out. That isn't to say, however, that this was a terrible read. It was actually a good one, but having read and liked its predecessor, I was naturally looking for the stuff that had me eagerly anticipating the release of the sequel.

The Neighborhood picks up after the events of book one with Katya pissed at Liam and Wulfric, who were revealed to be friends that knew what they were doing to the woman of their mutual desires. She wanted to get back at them, but she also wanted them PERIOD. But how does Katya get over what they did, and when push comes to shove, how will she be able to choose one over the other? Living in the same neighborhood isn't easy, but the thought of not living with one man in particular may leave Katya even more shattered than before. Liking your neighbors isn't always the simplest of tasks, but when you start falling in love with one of them? Simply torturous.

It needs to be said: I wasn't a fan of Katya's here. She was wishy-washy and while she seemed to wish she had more of a backbone, she just...didn't have one. I also didn't like how Liam was portrayed here. Where was the Liam I was rooting for in the first book?! Yep, I was on Team Liam, and it had a great deal to do with his personality and how he carried himself--naughty with a hint of nice underneath it all. This turnabout made me sad, almost as if he was made that way so as to justify the whole Katya and Wulfric pairing. Sigh. I didn't hate The Neighborhood; this had to do with being kinda disappointed, but such is what happens at times when expectations are high. 3.5 stars. ♥

Purchase The Neighborhood on Amazon.