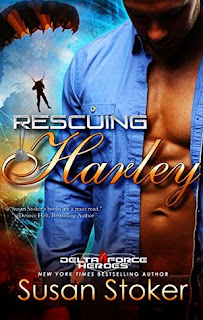 Rescuing Harley is the third book in bestselling author Susan Stoker's ongoing Delta Force Heroes romantic suspense series. This newest release features Delta Force team member Beckett "Coach" Ralston and video game coder Harley Kelso, who meet when Harley decides to take her very first skydiving lesson with Coach as her instructor. When a wayward goose wreaks havoc and forces Harley to take the reins in order to safely land both Coach and herself, a bond is created between the two of them. Harley isn't quite sure why Coach is as interested in her as he seems, but Coach refuses to let Harley put herself down. She's beautiful and nerdy and she's so much more than any of the other women he's ever been with before. But what happens when Harley disappears without a word and the one person that the authorities are looking at as a suspect happens to be none other than Coach?

I really enjoyed this latest addition to the Delta Force Heroes series! Harley is unlike any of the other female main characters that came before her, but then each of the women in the series are able to stand on their own merits, which is what helps make this series such a great read. Harley may be drawn to Coach but she doesn't go overboard in trying to keep his attention. She is who she is and while she tries to make apologies for it in the beginning, Coach is the kind of guy that doesn't just accept but embraces the woman that Harley is. Their story is also different in terms of the suspense aspect, because the point in the story where Harley goes missing had me guessing for a while but the final hypothesis I had turned out to be right one. As always, the rest of the Delta Force team were entertaining and Harley's family was a good addition to Rescuing Harley's cast of characters. 4.5 stars! ♥

Read my reviews for the Delta Force Heroes series: