Review: Her Enemy Protector by Avery Flynn (Tempt Me #2) 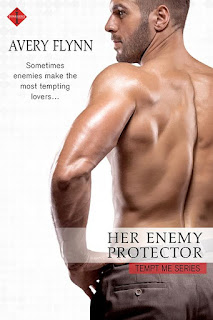 He may have been given the title of Earl of Moad, but Lucas Bendsten is first and foremost the head of the Silver Knights, the elite covert team that has vowed to protect Elskov, its queen, and its people. When chatter about high-power arms and weaponry being sold to a known enemy of the throne reaches them, Luc puts a plan into play, one involving a bit of blackmail. Luc intends to use jeweler Ruby Macintosh, the stepdaughter of the man ready and waiting to sell the arms, in order to get the information and confirmation the SIlver Knights need in order to apprehend all parties concerned. He's looked over Ruby's profile and he knows all about her propensity for enticing men and making them fall to their knees, and Luc is prepared. This woman isn't going to be able to do anything to break his renowned control or focus. That is, of course, until Lucas meets the feisty and fiery beauty...

Ruby Macintosh may have a reputation but its one that isn't based on fact. All she wants is to be free of the shackles her stepfather has placed upon her, but she also wants to make sure the two people she loves are safe and secure as well--her mother and her younger brother. She hates the control her stepfather has put over their lives for too many years. Now, she's forced to work with yet another man who's trying to control her in order to get what he wants, but she does admire Lucas Bendsten's dedication to this job. When other factors come into play, Ruby and Lucas are forced to work together to figure out a way to get what they need in the limited time that they have. Their engagement may have been a necessary lie, but the attraction and growing feelings they have for one another are absolutely real. Are Lucas and Ruby prepared to risk their newfound love for the sake of the mission?

Tempt Me is, hands down, my favorite Avery Flynn series to date. I loved His Undercover Princess and Her Enemy Protector, the second in the series, has reached the bar set by its predecessor. Ruby and Lucas's is an enemies-to-lovers tale but it's one that has extra goodness packed into it in the form of suspense and action and resulting in thrills on my end. Ruby and Lucas clashed but they also come together when it counted, not just as lovers but as allies. There were twists that I didn't see coming until they were right on top of me and I love it when an author is able to take me by surprise. Then there was the introduction and addition of Jasper Macintosh and Talia Clausen, Ruby's brother and one of Lucas's Silver Knights agents, who I suspect will get their turn in the spotlight in the next book--which I'm already quite excited about! Her Enemy Protector was the highlight of my reading day. Five stars! ♥

Read my reviews for the Tempt Me series:

His Undercover Princess (book one) - five stars - My Review