Review: All the Way to Shore by CJane Elliott 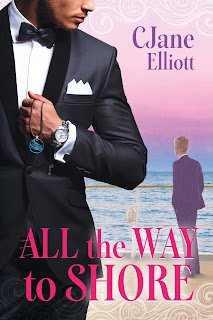 All the Way to Shore is a standalone M/M contemporary romance novel from CJane Elliott and is my first read from the author. It's the story of twenty-eight-year-old Jonathan Vallen and thirty-two-year-old Marco Pellegrini who meet when Marco is brought in by Jonathan's father to become the temporary CEO of Vallen Enterprises since Jonathan is in no way prepared enough for his father to pass over the reins to him, not that Jonathan is at the very least interested. He's always been more artistically and creatively inclined, something his late mother supported. His father never really cared, not with Jonathan's older brother being primed to be at the helm of Vallen Enterprises. But when James unexpectedly passes away, the burden is unceremoniously placed upon Jonathan's shoulders. Even after four years, Jonathan isn't ready and Marco being brought is the sign he's been waiting for. With someone better now in place, Jonathan can move on and live his own life. When he and Marco meet again one year--and forty pounds later--sparks fly. Marco doesn't recognize him and Jonathan's cousin introduces him with a fake name. He decides to go with it. A new name allows him to freely flirt and pursue the mutual attraction with Marco. But it's more than an attraction and when Marco learns Jonathan's real identity, everything falls apart.

If you're looking for a sweet love story with just enough steam and angst to keep things interesting, this may be your cup of tea. When Jonathan and Marco first meet, it's purely professional, without nary a quiver in the belly or erratic heart thump to signify that something more could be in the offing. It takes a year and Marco losing forty pounds and his geeky glasses for them to meet and begin to fall for one another, though I don't think Marco is actually the type to be shallow, so I'm guessing it was more about the vast change in Jonathan physically that leads to the whole fake name fiasco, no thanks to Jonathan's cousin Anthony. Other than the fake name, though, what you get with Jonathan is the real deal. I do understand, however, Marco's feeling of betrayal because, in hindsight, their romance began with a lie. Those two were sweet, and I'm talking saccharine-like levels. I have nothing against sweet stories, but I guess it's a matter of moderation and with Marco writing Jonathan's name more than once in one sentence in his journal just reminded of how I was as a preteen writing down my crush's name on the pages of my diary. For one main character who was nearly thirty and another in his mid-thirties, their behavior made this feel more like a young adult (YA) love story. Still, I did like All the Way to the Shore more than I didn't, so 3.5 stars. ♥

Purchase All the Way to the Shore on Dreamspinner Press | Amazon | B&N | Kobo.