Review: Tell Me a Story: The Complete Novel by Tamara Lush 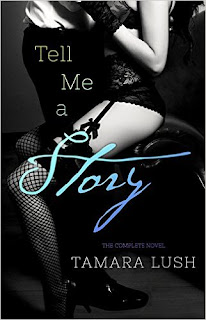 Originally released as a five-part novella series over several months this 2016, author Tamara Lush's Tell Me a Story can now be read as a complete novel in paperback. It's the intriguing story of Emma Price, thirty-two, a bookstore owner, storyteller, and aspiring writer, and Caleb King, forty, a real estate mogul, and a widower. Their paths cross when Caleb and his younger sister check out the Story Brothel where Emma is a featured storyteller, sharing her self-written tales with those willing to pay, with half the fee going to charity. The connection between them is instantaneous and palpable, and while Caleb clearly wants Emma to tell him a story, it's as clear as day that he wants more than listening to her erotic tale. Caleb wants to do the dirty things Emma is describing and there's no denying that Emma would probably let him. From there, their love story has its share of challenges and issues that need to be overcome, but they're stronger together and a happily-ever-after is within reach. That is, until Emma's love is tested, pushing her to the point where she questions if her story with Caleb does end and unhappily at that.

Caleb and Emma's love story is one guaranteed to keep you on your proverbial toes. It's intense, romantic, and sexual. There are a couple of moments where you're lulled into complacency, thinking that these two are all set to ride off and get that happy ending that many love stories guarantee...only nothing in life is ever guaranteed, and so their love is tried and tested. While I loved the first four parts of their story, I confess that it was the fifth and final one where I I felt torn. My heart squeezed tightly in my chest in empathy because while Emma was a strong woman, I couldn't help but wonder just how much more she could possibly take before she finally broke. There was a part of me that wished she would walk away while another part wanted her to hold on a bit longer, hoping against hope that everything would work out. Gah! I loved Emma and I loved Caleb just as much, although I admit that the fifth part made me want to shake him a few times. With a cast of characters that brought various dimensions to an enticing tale of a love that's tried and triumphs, five stars for Tell Me a Story: The Complete Novel. ♥

Purchase Tell Me a Story on Amazon.