Book Spotlight: Left at the Altar by Margaret Brownley 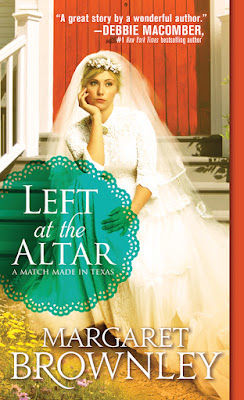 Left at the Altar
(A Match Made in Texas #1)
by Margaret Brownley
Date Released: November 1, 2016
Sourcebooks Casablanca

About Left at the Altar
Welcome to Two-Time, Texas:
Where tempers burn hot
Love runs deep
And a single marriage can unite a feuding town
…or tear it apart for good

In the wild and untamed West, time is set by the local jeweler…but Two-Time Texas has two: two feuding jewelers and two wildly conflicting time zones. Meg Lockwood’s marriage was supposed to unite the families and finally bring peace. But when she’s left at the altar by her no-good fiancé, Meg’s dreams of dragging her quarrelsome neighbors into a ceasefire are dashed.

No wedding bells? No one-time town.

Hired to defend the groom against a breach of promise lawsuit, Grant Garrison quickly realizes that the only thing worse than small-town trouble is falling for the jilted bride. But there’s something about Meg’s sweet smile and determined grit that draws him in…even as the whole crazy town seems set on keeping them apart.

Who knew being Left at the Altar could be such sweet, clean, madcap fun?

Read my four-starred review of Left at the Altar.

Add Left at the Altar on Goodreads. 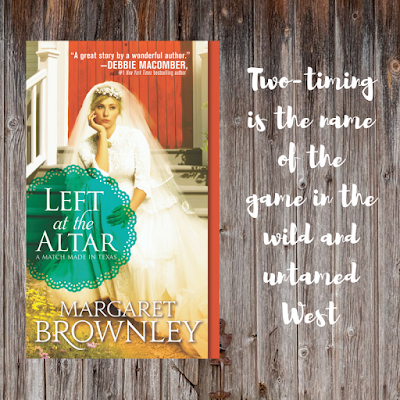 An Excerpt from Left at the Altar
Tommy grimaced. “Meg, I’m sorry, but I can’t do this. I can’t marry you.”

Meg stared at him, dumbfounded. This can’t be happening. “What are you saying?”

“I’m sayin’ I can’t be the husband you want. I can’t spend the rest of my life workin’ on watches in my father’s shop. All those hairsprings and gears and stems and— ”

“This is how you give me the news?” She gave him an angry shove. “Tommy Farrell, I’ve known you nearly all my life, and you’ve caused me plenty of grief along the way, but this takes the cake!”

“I’m sorry.” He slapped his hand to his forehead. “I’m goin’ about this all wrong. It’s not that I don’t want to marry you. I just can’t.”

“And you waited for our wedding day to tell me this?”

“You feel bad? How do you suppose our guests feel after being kept waiting all this time? And what about the town? Our fathers promised to end their feud— ”

“By humiliating me in front of the entire world?” She stared at him as if seeing him for the first time. For years, she’d made excuses for his lackadaisical ways and had even defended him to his own father. She’d forgiven him for forgetting her birthday— not once but twice! But this…this was by far the worst thing he’d ever done.

“I’d make you miserable,” he continued, his Texas twang even more pronounced than usual. “I’m not ready to settle down. I want to see the world. To travel to Europe and Asia and…and the Pacific Islands. I read somewhere that they’re real nice.”

“You’ve said some mighty dumb things in your life, but this has got to be the dumbest.”

“I knew you wouldn’t understand.”

“No, I don’t understand,” she cried. “I don’t understand how you could wait till today to throw me over for a bunch of islands!” She backed away from him, fists at her side. “I should have listened to Pa.”

“Meg, don’t look at me like that. It really is for the best. Maybe in a year, or two or three, I’ll be ready to marry and settle down. Maybe then we can— ”

“Don’t you dare say it, Tommy Farrell. Don’t you even think it! I’d sooner die a spinster than marry the likes of you.”

“I mean every word. I don’t ever want to see you again. Not ever!” 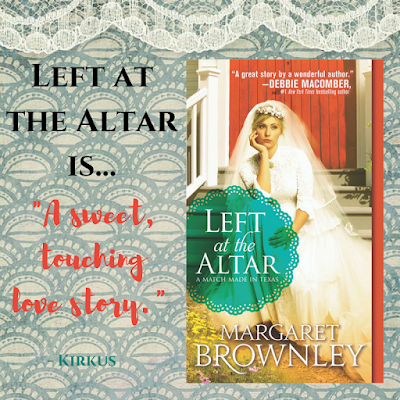 Margaret Brownley penned her first novel at age eleven and has been writing ever since. She’s now a New York Times and CBA bestselling author and has written thirty-five novels and one nonfiction book. Margaret and her husband have three grown children and make their home in Southern California.