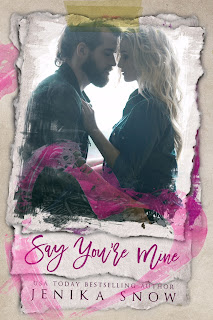 From the moment Maggie entered the classroom, six-year-old Felix knew he wanted his shy, new classmate to be his best friend. The heart he paints for her cements that desire and from then on, the two are inseparable. By the time they're both eighteen, Felix has been in love with Maggie for years, but he hasn't gathered the courage to confess his feelings for the only girl he's ever wanted to be with. Soon, they'll be graduating high school and starting college at the same place and moving into the same apartment as roommates. Felix has always wanted more, and he has no idea that Maggie has felt the same way about him for possibly just as long. Her family has never seen her as anyone worthy of their attention, and there's no denying how much Maggie loves Felix. But she also happens to be so in love with him. Will either of them have the courage to claim the other for their very own?

This is now, hands down, my favorite Jenika Snow novella. Say You're Mine was sweet and romantic, and yes, quite steamy. This isn't insta-love; this is a love that's grown over the years, one that started as friendship and then evolving into more. There was always an innocence to it until they got older. I liked both Felix and Maggie and while the story isn't something new, especially when you've read as many books as I have, I still appreciated the manner in which it was told and that it wasn't overly complicated, living up to its being a simple love story of two friends wanting to be so much more to each other. This is the first novella in the author's new series, You're Mine, and I'm curious to see if the other novellas will have that far sweeter feel to it compared to her stories in the still ongoing A Real Man series. If you like tales that are short, sweet, and steamy, check out Say You're Mine. 4.5 stars. ♥

Purchase Say You're Mine on Amazon.