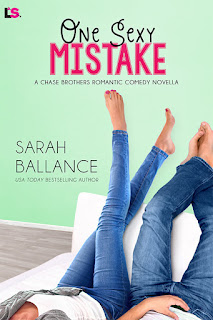 Oh, Sarah Ballance. When The 48-Hour Hookup came out, I was sad because it signaled the end of a series that I had fallen in love with more and more with each new book that was released. And then lo and behold, there was this novella waiting for me on NetGalley to get my greedy hands on it and it was none other than a Chase Brothers novella! Yes, there was still one story that had to be told and it was none other than Grady Donovan's, who fans of the series will recall from the series starter, Five Things I Love About You, is the older brother to Estelle Chase née Donovan. Each of the books in the series can be read as a standalone, but I seriously recommending and highly suggesting that you read all the books and because I'm a stickler for this sort of thing, that you read them in order.

Grady Donovan may have promised Olivia Patton three minutes when they agreed to hookup via Tinder, but one monolithic snowstorm wreaks unexpected havoc on their wham-bam-thank-you-ma'am plans. Neither one of them is looking for a relationship--Grady doesn't believe in them and Olivia just came out of one--but as potent as their sexual connection may be, it's quickly on the fritz when the two are forced to engage in non-sexual activities while stuck in the apartment. Grady's aversion to commitment and all that lovey-dovey fluff makes him antsy comes into play and Olivia's opinion of Grady dips even further once she learns who he actually is. But even when everything points to them being nothing more than a mistake, why then does walking away feel even more of one?

I adored Grady and Olivia. They were snarky and witty as individuals, but damn, they were undeniably sexy when they were together. This is, I think, the third story I've read that involved either Tinder or Grindr and each time, I can't help but wonder if true love can actually be found on it because it is, after all, an application used for hooking up with a stranger. But Grady and Olivia make you want to believe that this sort of thing is, indeed, possible. I snort-laughed during certain parts of the story and most of the others had me smiling like a lovesick fangirl. The end of chapter eleven and the entirety of chapter twelve were quirky and ingenious and frickin' swoony and holds the title of "favorite fictional grand gesture" of 2016. One Sexy Mistake is a five-plus-starred end to this fab series. ♥

Read my reviews for the Chase Brothers series:

For Seven Nights Only (book two) - five-plus stars - My Review

One Sexy Mistake (novella) - five-plus stars - My Review (posted above)