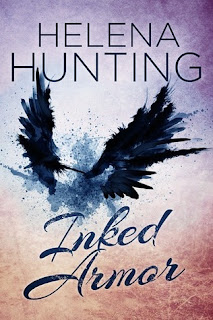 Tenley was the inception, my new beginning, the rebirth I'd been striving for. She'd embodied the phoenix embedded in my skin, rising from the ashes to start again.

In this, we were marked by one another. It went far beyond ink on skin.

It went right down to the soul. In this life, for as long as we had, we would be each other's armor.

Inked Armor is the sequel to Clipped Wings and it takes place a few weeks after the cliffhanger ending in the first full-length novel and the events in the follow-up novella, Between the Cracks, in the series. Graduate student Tenley Page's return to Arden Hills was meant to be her way of finally burying her past, a past that came back to haunt and taunt her and her new life with tattooist Hayden Stryker in Chicago. But her decision to leave Chicago has led to Hayden's spiral downward, into a dark place that he's tried to move forward from but has never really been able to since that horrific night his life was forever changed at only seventeen. Even as she makes her way back to him, convincing the man she loves that she has no intention of ever leaving him again is easier said than done. Their love was fraught with fragility, but can they now strengthen the foundation towards their own forever?

Oh wow. First, I'm just glad that I had this book sitting and waiting for me once I finished reading both Clipped Wings and Between the Cracks because had I been forced to wait for even a day, I would have been one unhappy reader. Tenley and Hayden's relationship was in limbo after Tenley upped and left with Trey Hoffman. Yes, her reasons were somewhat admirable, but had my boyfriend done that to me, I would have reacted the very same way Hayden did. She may have gone back to Chicago, but what she had with Hayden is now on shaky ground, and the fact of the matter is, because of all the secrecy and lack of absolute openness and honesty between the two of them, it wasn't all that stable to begin with. So they struggle to move forward as a couple, and I loved how Tenley truly evolved in this sequel, having gained the courage to stand up, not just for herself, but for her love for Hayden.

If Tenley's past was at the center of book one, it is now Hayden's past that has its claws in him and it's refusing to let him go, regardless of whether he's asleep or awake. There were many unanswered questions swirling in his head and he desperately needs closure if he has any hope of truly being free of the shackles forced upon him by the lack of justice in what happened to his parents. One of the best things about this series is its cast of characters because there aren't any throwaways here, not when it comes to the recurring supporting characters, and yes, that includes the ones you wish the worst kind of karma upon. Tenley and Hayden do get their happy ending here, and Chris Zelter and Sarah Adamson's story is told in Fractures in Ink, but I'm hoping Lisa and Jaime (I can't recall if their last names were ever mentioned) get, at the very least, a novella in the offing. Inked Armor garners five-plus stars. ♥