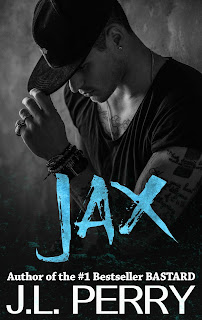 Jax is the latest release from bestselling author J.L. Perry and it's only my second read--Hooker being the first--from her but she's left me nothing but impressed both times. I had no idea that this was connected to Bastard, but it reads quite well as a standalone, although now I'm antsy and itching to read both Bastard and Luckiest Bastard as soon as my schedule permits because I was all kinds of curious about Carter Reynolds--who, while I was reading Jax, I was hoping would get his own story, and lo and behold, his was actually released first! Haha! I seriously need to do a better job catching up on all the fantastic books out there that I haven't gotten around to reading yet. If Bastard is anywhere as good as Hooker and Jax were then I'm already so looking forward to getting my hands on it!

Jaxson Albright was nineteen when he finally did something about his feelings for his best friend, eighteen-year-old Candice Crawford, but in the aftermath of the momentous moment, his fears and insecurities got the better of him, leading to a separation that lasts more than three and a half years. The life that his parents had envisioned for him was no more, and now Jax has made good on his dream of opening his own tattoo shop. The one thing missing was Candice, but when they reconnect, it's almost as if the closeness they once shared is as strong as ever. But things are different and they have changed. After all, almost four years have passed and they led lives apart from each other. The feelings Jax and Candice have may be strong but could be tested once one little secret is revealed.

Jax and Candice's relationship often suffered due to the lack of open and honest communication between these two erstwhile lovers. Secrets were kept and what happened after that night they shared together was never really discussed, both choosing to sweep it under the rug. So yes, there were moments I was frustrated with both of them, but goodness, how these two had me rooting for them and their happy ending. That one particular secret that was being kept was easy to guess early on, but once it was revealed, there was still quite a bit of conflict these two had to undergo and endure, and that made for an even more interesting read. Their story does play out over several years, and I was all in--from the beginning till that le sigh-worthy ending. I'm giving Jax five out of five stars. ♥