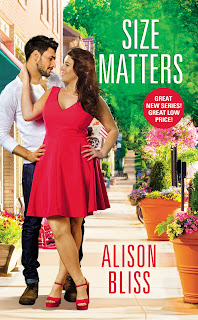 Note: This ARC was provided by the author via Forever Romance in exchange for an honest review.


Size Matters is the first novel in author Alison Bliss's new romantic comedy series, A Perfect Fit, which is about a pair of curvy best friends who find love and acceptance. Book one is about Leah Martin, a talented baker who has spent her entire life having her weight and appearance nitpicked by her overbearing mother and who meet just as she contemplates being in the difficult position of baking the wedding cake for her ex and his bride. Leah meets Sam Cooper when their respective best friends catch each other's eye at a bar. They may have had a promising start but Sam is wary of being around the opposite sex, especially after his last girlfriend made one too many assumptions about how they were going to live happily ever after. One comment has Leah seeing red, and when he tries to apologize and make it up to her by helping her deliver her ex's wedding cake, things go overboard when he announces that not only is he with Leah but that they're engaged. What follows is these two trying to stay within the friend zone while figuring out how to end their fake engagement. But what if they both want it all to be real?

I have a soft spot for love stories that have a curvier, plus-sized, or chubbier female lead character. Maybe it's because I can relate to her more, having dealt with my own weight issues. Leah was a good heroine, someone who was making her way in the world by following her dreams. Leah and I share one particular philosophy in common-- You lose weight for yourself, not for anyone else--and I loved her for that. Unfortunately, she's been on the receiving end of one too many taunts, insults, and backhanded compliments and each one has made her immediately defensive of whatever comes out of the mouth of other people. It's the stuff that Sam that gets to her the most and I get why, although I was torn between wanting to smack him upside both sides of his head while shaking Leah and giving her a pep talk about not immediately jumping to conclusions. I was on the fence when it came to Sam because there were certainly times where he was really sweet and caring, but then he would speak without really considering whatever it was that was going to pop out of his mouth. Size Matters garners four stars. ♥