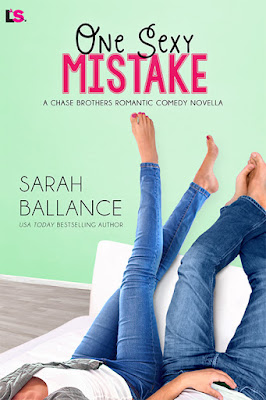 About One Sexy Mistake
It’ll be the longest one-night stand ever…if they don’t kill each other first.

Olivia Patton’s life just imploded. One night with sexy hacker Grady Donovan seems like the perfect, ego-soothing plan—until an epic snowstorm shuts down the city and thwarts her morning-after escape. Now the only walk-of-shame she’ll be taking is right back to Grady’s door.

Forced to actually talk, Grady and Olivia realize they can’t stand each other. Forget another round in the bedroom—if it wasn’t his apartment, she’d shove Grady outside to freeze. But with all the blistering sexual tension flying around, a second night with the hacker might be exactly what she needs…if they don’t kill each other first. 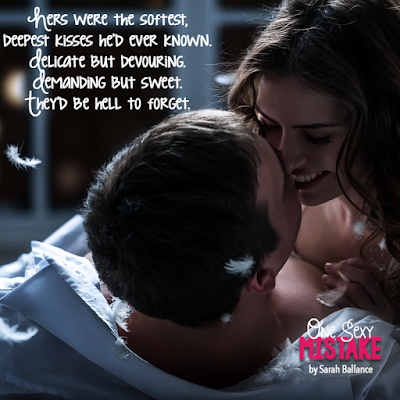 Read my five-plus-starred review of One Sexy Mistake.

Add One Sexy Mistake on Goodreads. 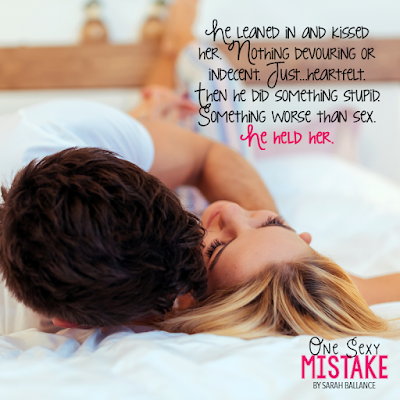 An Excerpt from One Sexy Mistake
Grady Donovan sucked at this hookup thing.

The trick was finding a woman who was on the same page emotionally. Tinder had a reputation as a “hookup app.” So Tinder it was.

Tinder PC, because he was not having a one-night stand with someone without viewing a photo bigger than a postage stamp.

After hours of agonizing over how to best describe himself on his bio, adding and deleting gems like please leave before breakfast and conversation not included, he’d finally nailed it: Frighteningly intelligent single male. Computer geek. No interest in romance but great in the sack. No relationships, please.

Accurate? Definitely. Odds of snagging interest? Nil, in his experience. But, he figured, don’t ask and ye shall not receive. Needless to say, he hadn’t expected a response.

Especially not the one that came through ten minutes later, prompting the mother of all double takes. Olivia’s profile picture was too good to be true.

So was the rest of her. Especially her bio. Hacker girl with a broken heart looking for a boy toy to make it all better. One night, no strings. I get to leave first. Two-minute wonders need not apply.

The irony was strong. As long as she followed through and actually left without asking for his hand in marriage, she was everything he could possibly want in a woman. Scratch that. She was all he could want from a night.

A beautiful woman who wanted to leave first.

He watched the screen, expecting her to disappear. He was no hardship to look at, but he’d said no romance or relationship, which left him floored that anyone would respond.

Let alone an anyone who was on the same, admittedly unconventional, page. Unless it was a trick.

Suspicion probably shouldn’t have been his first reaction to seeing the incredibly sexy photo pop up on the screen, but with a prank-happy extended family like his—all courtesy of his four brothers-in-law—being trolled was a distinct possibility.

Even via a random hookup app.

A muscle in his jaw jumped, and he realized he was doing this wrong. People were supposed to be all over these connections. Swipe right, get laid, problem solved.

Still there? she typed. Because if that two-minute thing is a deal-breaker, I need to know. At which point I may mock you. Mercilessly.

Grady stared at the newly arrived message, thinking the threat of mockery was the best excuse he’d ever have to bail.

But this was also probably his best chance to score.

Looking at Olivia’s picture, he really didn’t want to give up on the chance. He couldn’t believe his luck. Rich, wavy brown hair tumbled past her shoulders. Eyes sparkled in the same hue. She glowed.

She was definitely too good to be true.

I can guarantee at least three minutes, he wrote, then sat back. There was no good reason a woman like her would need an app, unless it was because she was tired of being hit on for being gorgeous.

For the first time in pretty much ever, he wished for more personal communication.

A new message popped up. So what do you have against relationships?

He hesitated over a response. I don’t care for the drama, he typed. Or the rituals. Or the expectations.

Ah, she replied. A girl gets three minutes one night and wants four the next.

Something like that. Actually, it was a lot like that. At one time, he hadn’t hated the idea of a relationship. In fact, all he’d ever wanted was for someone to accept him for who he was, which sounded like a schmaltzy spiel of bullshit, but it was true. He enjoyed going out every now and then, and he’d hold a woman’s purse at the mall if he had to. But having to out-do every other couple on Facebook or Instagram or whatever social media platform was the rage at the moment burned him out.

If being in his own goddamned relationship meant he had to compete with everyone else’s, then he’d be just fine alone.

Except for one teeny caveat.

What about you? he asked. Not buying that you can’t get a date.

Well, okay then. You could get that from anyone, he responded. Why me?

You’re a mile away. It’s snowing.

You keep impossible standards, he typed back.

And you’re hot, and straightforward. And you did promise great sex.

Anyone can promise that, he noted.

Actually, she replied, I’m pretty sure no self-professed computer geek has ever promised great sex.

He rolled his eyes. And here I was thinking the self-professed hacker would appreciate my skills.

I plan to, she said. For the entire three minutes.

Well, hell. This was the part where he should promise her a few hours, but if she looked anything like her picture, he’d be better off promising her a few rounds. And he could only pray the first one lasted three minutes.

He pulled up her profile again, still suspicious. There wasn’t much there, so the repeated glances were futile.

You don’t seem worried about hooking up with someone you’ve never met, he typed. Are you crazy or just adventurous?

Her answer was immediate. Do you want to find out?

Did he? That was why he was online, though he certainly never expected he’d find anyone like her. She was too perfect—not just physically attractive but also in a field of work closely tied to his own, if there was any truth to the “hacker girl” statement in her bio. While he didn’t need to have anything in common with Olivia, if they actually had a conversation—versus creepily not speaking at all—there was something to be said for shared interests.

He’d had plenty of dates with women who lectured him about how boring computers were, that he should get out and live a little. These were, of course, the same women who couldn’t peel their eyes from their smartphones, but that point was seldom appreciated when he voiced it.

But it probably didn’t matter. People didn’t use hookup sites in search of sparkling conversation.

Especially not him. He caught himself looking over his shoulder, half-expecting to catch one of his brothers-in-law doubled over in laughter on the fire escape.

Instead, he got an eyeful of the neighbor’s yellow-eyed, helter-skelter-faced, crooked-fanged mini-wildebeest the old woman called a cat. And yes, he jumped.

That thing should be in a zoo. Or a freak show.

Behind the questionably feline façade, snow fell. Grady had no idea why that woman let the cat out in this kind of weather, but he wasn’t inclined to let the thing freeze. Even if it was the ugliest, creepiest excuse for a cat he’d ever seen.

Unfortunately, Mrs. Harmon had a habit of smacking him with her purse when her precious Mortimer found his way into Grady’s apartment, which made him wary of rescuing the cat, at least immediately.

He glanced back at his computer. The cursor blinked, and he realized there might very well be an actual woman on the other end, waiting.

If there was any chance she was legit, he was in.

He typed his next message and hit send before he could second guess the insanity of meeting a stranger for sex. Your place or mine? 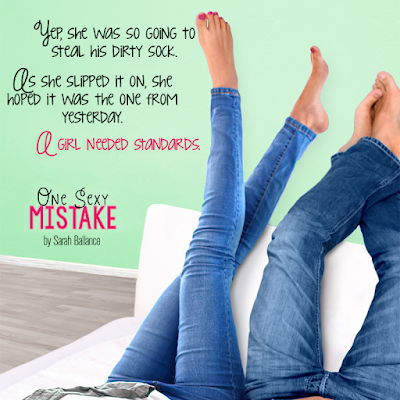 Sarah and her husband of what he calls “many long, long years” live on the mid-Atlantic coast with their six young children, all of whom are perfectly adorable when they’re asleep. She never dreamed of becoming an author, but as a homeschooling mom, she often jokes she writes fiction because if she wants anyone to listen to her, she has to make them up. As it turns out, her characters aren’t much better than the kids, but nevertheless, you’ll find her writing sexy contemporary romance for Entangled Publishing until they throw her out.