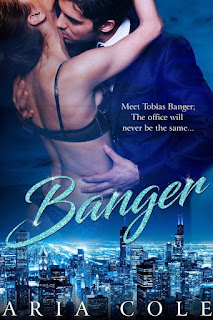 Note: This ARC was provided by the author via Ardent Prose in exchange for an honest review.

Banger is an office romance and the latest release from Aria Cole. Tobias Banger is the thirty-five-year-old CEO of Banger Industries and his life over the past decade and a half has been about leaving his past behind and becoming a better and more successful version of himself. Life has been good and his focus has never wavered from work...that is, until he hires a new secretary. Ellis Ford was an exemplary intern and an exceptional student, so having her become his secretary was a no-brainer for Tobias. However, he had no idea just how gorgeous the fresh college graduate was nor did he ever contemplate how he would react to being around her on a daily basis. Tobias has never wanted a woman the way he wants Ellis. He's kept things professional for a month, but now he's done. All the flirting and innuendo come to a head when they both get locked in an office closet...but what about after?

Aria Cole has consistently gotten better with each new story she's published--faltering only with Taking Tessa--and Banger shows that improvement in spades. This isn't an insta-love story although it has a hell of a lot of the lust and sex that I've come to expect with quickie reads like it. The sexual tension between Tobias and Ellis is pretty intense but it's also playful and shows that there's more to Tobias than being the usual alpha wealthy CEOs like him tend to be. I also really liked Tobias's back story and how it plays a role of sorts in the developing relationship between him and Ellis. My favorite thing about this particular novella was how Tobias and Ellis chose to handle their changing status of employer and employee to lovers because it was so refreshingly different from the usual secrecy that prevails in office romance stories. Banger is one of my favorite Aria Cole reads and it receives 4.5 stars. ♥