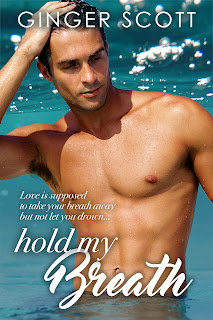 Note: This ARC was provided the author via WordSmith Publicity in exchange for an honest review.

"Maddy, there is no a thing in this world I wouldn't have done to make you happy."

His words land on my chest. They dig inside and squeeze my heart and stop my breath. So many things have twisted and turned since Will came back—since he came home. Our worlds have been on this slow descent, but they've collided together here and now. Our truths have tangled, and it's clear now as I look at him that there is no going back for us. We will always be everything we've always been for one another. We'll always push; we'll always compete—he'll always be my fire—but not without everything else, we are beyond those things. Not without this.

Will Hollister has been trying to keep his head above the guilt and the responsibility that have been drowning him. He was a competitor, one he tended to outshine almost everyone he was up against...everyone except his younger brother Evan. He had no qualms letting his brother be the one who shined brighter than almost anyone else...anyone except Maddy Woodsen. She was the girl his brother loved, the girl that brought light to the world around her. She was the girl that Evan deserved; she was the girl Will wished for. But Maddy and Evan belonged together, and all Will wanted was for these two people who meant more to him than any others to be happy. And then fate, like an unexpected riptide, came in and earth below them shifted, changing life as each of them knew it.

I could have read the Ginger Scott ebook gifted to me a couple of months ago and made that my first read from the author, but maybe Hold My Breath was supposed to be the introduction to her writing all along. Will Hollister and Maddy Woodsen's tale of true love, redemption, and absolution stole my breath—and my heart—making this an absurdly easy addition to my list of top reads for the year. I empathized and sympathized, recognizing things about both Will and Maddy that I see in myself while those I didn't had me pausing and contemplating what I would do if I were in their shoes. These are already pluses as far as I'm concerned. Yes, I read for escapism, but not on a daily basis. I prefer book that make me feel AND make me think. And this awe-inspiring book? It did all that and more.

And while this may have been my very first Ginger Scott read, trust me when I say that it won't be the last, and I'm not just saying that simply because I have The Hard Count (the ebook I mentioned at the beginning of this paragraph) waiting for me on my Kindle app. There's something about her writing that calls to me. It has angst and drama but not the kind that I feel overwhelmed by and it has humor and lighter moments to keep things on a more even keel. But the most important things that it has all throughout the book are heart and near-impeccable storytelling. I doubt I will ever forget Maddy and Will, what more their heartrending story of tragedy and triumph. I've recommended many titles this year, but I encourage you to read Hold My Breath before all else. Five-plus stars. ♥