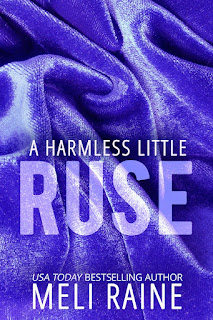 A Harmless Little Ruse is the second book in bestselling author Meli Raine's romantic suspense series, Harmless, and picks up immediately where the first book, A Harmless Little Game, left off and told from the perspective of the male lead character, Andrew Foster. The four years since the night that set both Drew's and Lindsay Bosworth's lives in a downward spiral forever remain at the forefront of their consciousness, neither one of them having forgotten what happened and who were involved. But while we know how Lindsay was forced to deal with the aftermath of that incident, Drew was not left unscathed. The secret he keeps from Lindsay is one that very few know, and he isn't sure how she'll react when she learns the truth. Drew wants nothing more than to protect Lindsay from the men who destroyed their lives four years ago, but there are things that are beyond his control. But not everything is as it seems and while they may have thought they knew who they were up against, clues could well point to one puppet master pulling every manipulative string, leaving Drew and Lindsay in more danger.

Gah! I knew coming in that this was going to end in a cliffhanger but still! The evilness of not knowing what's going to happen till December has me overly anxious. It's difficult to know who to trust in this series because everyone has something to hide and that's motivation enough to get their hands dirty. Lindsay and Drew have been lone wolves after the same thing--revenge--but they'll need to trust one another and work together, but how can you do that when there are far too many secrets being kept? My heart broke for Drew when the biggest secret he was keeping was revealed, though I did have an inkling that's what he wasn't prepared to share with Lindsay. Things have certainly ramped up and I confess that I was left with far more anxiety at the end of this second book than compared to the end of the first one. Revenge, justice, politics...and at the heart of it all is that underlying love that still remains between Drew and Lindsay. One without any of the others would have left me wanting. And well, I actually am left wanting...wanting more! A Harmless Little Ruse met all my expectations, and gets five of five stars. ♥

Read my reviews for the Harmless series:

A Harmless Little Game (book one) - five stars - My Review