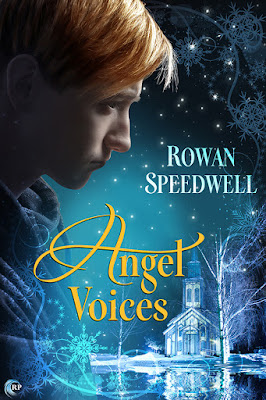 About Angel Voices
One frigid winter night a week before Christmas, college student Will stumbles into a church during choir practice, bruised by his own father’s hands. He’s out of the closet now—there’s no going back since his fundamentalist father learned the truth—but he’s also out of a home, a family, and a future. Will has nowhere to turn. No one to care.

Except . . . Will’s roommate, Quinn, cares. Maybe too much. He’s been attracted to Will since they moved in together, but never dreamed his crush was gay. With Will’s life in pieces, Quinn doesn’t want to push. He also knows he has more experience than Will, who’s never even been kissed.

Then Will’s father makes a reappearance, and Will has to learn to trust his heart more than the voices of his past. But it’s the season of miracles, faith, and hope, and Quinn is determined to teach Will how to love and be loved.

An Excerpt from Angel Voices
“Okay, okay,” Bennigan said, waving his hands absently. “Fifteen-minute potty break, then we’ll go through the rest of the program. Quinn, good job on the solo, but I still think you need a little more punch on the ‘fall’ so that it really stands out. Wake the sleeping millions, got it?”

“Yes, sir!” Quinn saluted in cheerful mockery and headed to the stairs from the choir loft, beating the rest of the group to the door and lunging in his usual headlong way down the worn stairs.

“One of these days you’re gonna fall and break your neck,” Sean said behind him.

“Not him,” Ellen said in disgust. “Leads a charmed life.”

“I do, I really do,” Quinn agreed, and opened the door out into the nave, the rest following, chattering, as he led the way to the restrooms at the rear of the church.

On his way back, as he wiped his hands on his sweatshirt because the stupid blow-dryers in the bathroom never dried properly, he saw the figure huddled in the very last pew on the far side of the nave. He would have just taken the figure for a street person who had come in to get warm, but it wore the green, blue, and orange striped scarf his roommate Will had worn over his denim jacket when he’d left that afternoon for the holiday break. Quinn had said something about the jacket not being warm enough, and Will had just muttered that he had a ride home.

The response was typical of Will—their conversations tended to be brief at best. Not that Quinn minded; Will was a quiet, considerate roommate, tidy and undemanding, if impossibly shy. He was nice to look at, too—a bit gangly, like most teenaged guys, but with a strong bone structure under his pale skin, hair the color of autumn leaves, and eyes the green of spring.

The guy in the corner had Will’s untidy dark-red hair and the denim jacket. Quinn frowned. That didn’t make sense—when Will had left, he’d had his duffel with him and was clearly going home. Had his ride fallen through? Why hadn’t he gone back to the room, then?

“Will?” he said quietly, crossing the flagstone aisle to the pew where Will sat.

There wasn’t any answer. Was he asleep? Quinn slid down the pew to his side and sat, touching his shoulder gently. “Will?” he said again.

Will started, and looked over at Quinn in a disoriented panic.

Quinn’s hand fell away. “Holy fucking shit, Will, what happened? Were you mugged?”

Will’s face was a bloody mess, the skin blooming with bruises, his nose swollen, crusted with blood, and muddy with tears and dirt. His hands, too, were dirty, and red with cold. He reached up and pulled the scarf away from his face. His mouth was swollen, the lip split. “Quinn?” he said in confusion.

“Yeah, I’m fine.” Will sat up straighter, winced, then shifted away from Quinn’s reaching hand. “I’m okay. I just stopped in—I heard the singing. It was good.”

“What happened to you?”

Quinn looked up to see Bennigan standing in the aisle on the other side of Will. “Were you mugged? Do you want us to call the police?”

“It’s not okay, and that’s not from a fall. I thought you were going home. Were you in some kind of accident?”

“We need to call his parents,” Bennigan said.

“No! No parents! It’s nothing!” Will stood up, waving his hands frantically in denial, then went pasty beneath the bruises and collapsed into Quinn’s arms in a dead faint. 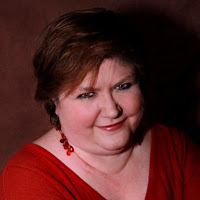 In her copious spare time (hah) she does needlework, calligraphy and illumination, and makes jewelry.  She has a master’s degree in history from the University of Chicago, is a member of the Society for Creative Anachronism, and lives in a Chicago suburb with the obligatory Writer’s Cat and way too many books.

Giveaway
To celebrate the release of Angel Voices, one lucky winner will receive $15 in Riptide Publishing credit! Leave a comment with a thoughtful question and your contact info to enter the contest. Entries close at midnight, Eastern time, on December 3, 2016. Contest is NOT restricted to U.S. entries. Thanks for following the tour, and don’t forget to leave your contact info!