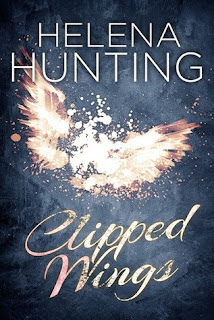 Hayden was the opposite of everything I'd ever known. He defied convention at every turn, and it made him that much more of a weakness. He was not only inordinately gorgeous but intelligent and passionate as well. Beyond the hard exterior, the brash comments and flirtation, a sensitive side lurked. But, like me, he was closed off; his tattoos formed his walls. I knew all about walls. I had built my own. With him I wanted to let them down, if only just a little. It was a dangerous thing to contemplate because in doing so they could very well crumble completely.

Why the hell did I take me THIS long to read a book that's been sitting in my e-reader for nearly two years?! Someone smack me right now? Gah! To make matters worse, I've actually had the series waiting for me and it took me signing up to read and review the latest full-length novel for me to get my lazy ass in gear and read all the books. Shame. On. Moi. But again, let me just stress that this is a case of better late than never because while the first five releases in the Clipped Wings series are between two and three years old, there's never a bad time to read them. I've enjoyed Helena Hunting's sexy romantic comedies courtesy of the Pucked series, but the Clipped Wings books have proven that she isn't just a genius when it comes to rom-com, but she has an undeniable gift for angsty, intense, character-driven romances as well. If I wasn't a fangirl already, these books would have really cemented it.

Clipped Wings is the first full-length novel in the contemporary romance series of the same title and it's the first part of twenty-year-old sociology student Tenley Page and twenty-five-year-old tattoo artist Hayden Stryker. These two are broken individuals who find solace in one another, and while they may not be broken beyond repair, their journey is far from easy, with wounds whose depth and breadth have made them more difficult to heal. They've experienced the kind of loss that would have brought countless others to their knees and made them unable to stand once again. Tenley and Hayden are both survivors, living the lives they've been left, but they still have their struggles, some of which are nightmarish and crippling. Within the other they've discovered a kinship, but while they bring each other an amount of peace, the past that refuses to remain hidden threatens to wreak havoc again.

This is one of those books that is best read with as little spoilery detail as possible. Seriously, fellow bookaholics, not knowing what Tenley's and Hayden's pasts going on will make for a far better reading experience, and that's something I can attest to. I'm also recommending that you have the sequel, Inked Armor, on-hand because this first novel does, indeed, end in a cliffhanger. There's also a prequel novella that comes before this one and a novella that comes after, and while I wouldn't exactly classify them as must-reads or being absolutely essential to the overall enjoyment of the series, you can get Cupcakes and Ink for less than a dollar and Between the Cracks is currently available for free. Tenley and Hayden are complicated and they do run you through the gamut of emotions, but there's no resisting falling for them and their unfinished love story. Five-plus stars for Clipped Wings. ♥