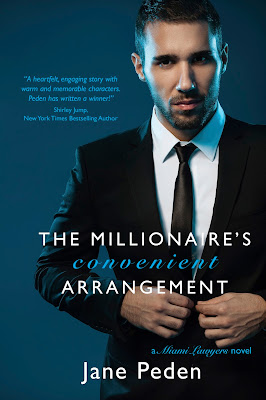 About The Millionaire's Convenient Arrangement
Her worst enemy is the one man she can’t resist.

Maria Martinez thought it was a dream come true when Ritchie Perez—a sweet and sexy guy she met volunteering at a soup kitchen—took her delinquent little brother Joey under his wing. But her dream becomes a nightmare when she discovers Ritchie is the same man who put her twin brother Tito in prison for 10 years. Now Joey’s in trouble, and Ritchie’s been appointed his temporary guardian. He’ll be moving into Ritchie’s luxurious waterfront Miami home—unless he’d prefer a juvenile detention facility.

And if Maria wants to be with him, she’ll be moving in too.

Now a hugely successful attorney in private practice, Ritchie made his reputation as a tough prosecutor who didn’t make deals with drug dealers and gang members. But that history comes back to haunt him when the woman he’s falling for believes he’s responsible for convicting an innocent man, and destroying her family. Ritchie wants to stop Joey from making the same mistakes his brother did. And he wants Maria in his bed. But as desire heats their blood, will the past reach out and destroy their future? 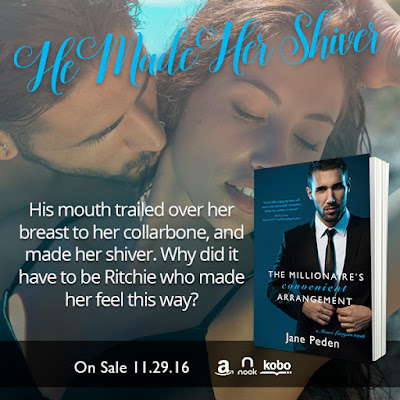 Read my 3.5-starred review of The Millionaire's Convenient Arrangement. 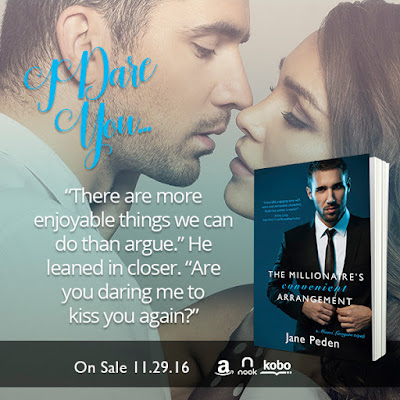 An Excerpt from The Millionaire's Convenient Arrangement
They were sitting at an outside café on the waterfront. Joey seemed to have rebounded quickly and managed to eat two burgers and a massive quantity of cheese fries. As soon as he finished, Maria had given him some money to go down the street and get ice cream so she could talk things over with Ritchie.
The second he was gone, she started, apparently realizing she needed to shift tactics and take a softer approach. Ritchie wondered how long it would take until that temper of hers took over again.
“Listen, I don’t want you to think I don’t appreciate what you did for Joey – for both of us – this afternoon. But I can tell how much this has shaken Joey up. He’s not going to be a problem from here on.” She took a measured breath and continued.
“So, as much as I appreciate your offer to have Joey move in with you for six months, it’s really not necessary. We couldn’t disrupt your life that way.”
She smiled at him, and he knew it must have cost her. Humble was not her style.
“It doesn’t work that way, Maria,” he said, and watched the smile fade from her pretty face.
“I don’t know what you mean,” she said.
“I mean, when you ask me to drop everything and run over to the courthouse and get Joey out of trouble, I’m happy to do that. And I was happy to take on responsibility for watching over him because that was what it took to keep the Judge from removing him and conducting a home study and dumping that kid into a system that’s going to hurt him more than it would ever help him. But when I make a commitment to help, I’m all in. Don’t expect me to put a temporary fix on this legal problem then step back and just wait for you to call me when the next crisis happens.”
He leaned forward. “Because the way things are headed, there will be a next crisis. And it won’t be as easy to make a deal with the prosecutor and the court next time.”
“I think you’re overstating it. This was a wake-up call for Joey. He’ll stay out of trouble from now on,” she said.
“Why not make it easier for him to do that? I like you, Maria. And I like Joey. He’s a good kid, and I want to help. But I don’t have time to run back and forth between your apartment and his school checking up on him.”
“I’m not asking you to do that.”
“That apartment isn’t big enough, and you know it. That’s why the best solution is for him to move into my house, where he has his own room. I can make sure he’s home when he’s supposed to be, he’s in the right school, and he’s doing the right kind of activities. You know he’s interested in sports. I can get him in some great programs after school and on weekends. No more hanging out with his friends from the old neighborhood, and no more sitting around an empty apartment thinking up ways to get in trouble while you’re at work.”
“So you’ll help him but only if it’s your way.” Her jaw was set stubbornly, and she narrowed her eyes, still holding onto her temper but clearly by a thin thread.
“That’s right. If you want me to help him, you have to give me a chance to do it my way.”
“And if I say no?”
“Then you might as well make a reservation for him to move into a cell with your brother Tito.”
Her face paled. “You knew,” she said, her voice a whisper. “You spent time with us, with Joey, you took me out on a date, you knew I was attracted to you. You kissed me,” she said, and a bit of the color came back into her face. “You must have realized that if I knew who you were, I’d hate you.” 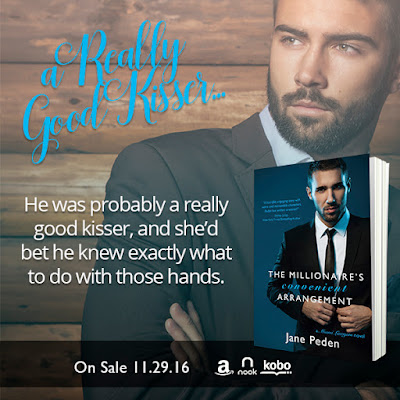 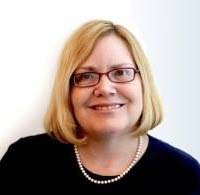 Jane Peden is a Florida trial attorney who writes sexy contemporary category romances set in the exciting South Florida city of Miami, where millionaire lawyers live extravagant lifestyles and find love when they least expect it. When Jane isn’t in court, you can find her at the beach with her laptop, dreaming up stories about successful, confident men who know what they want and how to get it, and smart, sexy women who demand love on their own terms.  Jane’s books promise sizzling chemistry in the face of insurmountable obstacles. And just when things couldn’t get any worse, an emotional payoff that makes it all worthwhile.

Jane grew up in the mountains of western Pennsylvania, but decided early on that the only thing better than escaping the cold for a two-week vacation at the beach was to live there all year around, so she traded her snow boots for a jet ski and has never looked back.  Jane lives on the sunny Gulf Coast of Florida with her husband, two kids, two dogs, and a fish. 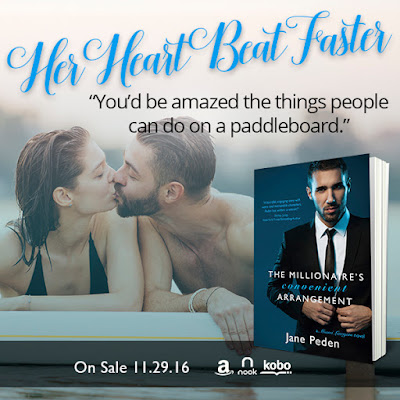